Just for our friend and fellow Blogger “ComicBookRehab”, (who expressed some curiosity) here’s an image of “Simon the Pieman” from the 1968 Filmation Batman animated series. The GOOD one they did, not the later ‘70s one with Bat-Mite and explicitly pro-social lessons! 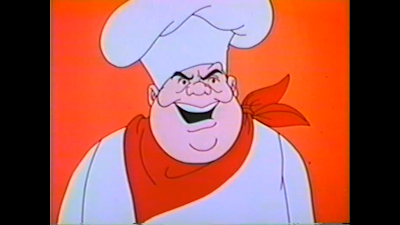 I believe this is the ONLY American animated Batman series unavailable on DVD! C’mon, Warner Bros.!

And, as a bonus, here’s an image of Batman from that same series. 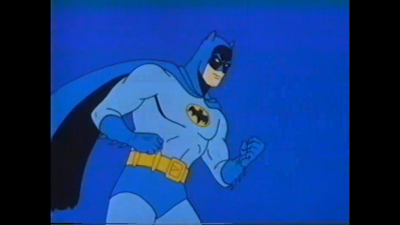 It's Sydney Greenstreet! Making the pies and hitting 'em, apparently.

When the show ended, an older and greyer Simon found a happy second career as mascot for Cinnamon Toast Crunch Cereal before being let go in favor of googly-eyed talking flakes. He's living comfortably well-off in his ranch in Tarzana, California. ;)

BTW, this is the 2nd Filmation villain that looks like an actor - I'm convinced Sweet Tooth IS Louie Anderson. If they ever try to do a revival of a camp live-action Batman tv series...I'm just saying. :)

GREAT observation! Especially, considering he’s one of my favorite actors.

So says the guy who bought Warner Archives’ “Background to Danger” (1943), the poor man’s “Cassablanca”, just because he was in it! Hey, it’s worth it for the very opening scene where the world blows-up (!) to the “big explosion” sound effect often heard in Warner Bros. cartoons!

Maybe because I heard Simon speak in Ted Knight’s voice, I failed to make the connection! …But, yeah!

As a kid,I thought Casablanca was the sequel to The Maltese Falcon - Spade, Guttman and Cairo, still on then trail of the black bird, and The Mask of Dimitrios was the prequel!

Not so oddly, I can see how you'd think that!

One of the things I love about movies of that period is that stars and character actors were often paired up with one another in multiple films. By today’s standards, a second combining of Bogart, Lorre, and Greenstreet would HAVE to be a sequel to their previous film. And, if not an “actual sequel” something close enough in genre or “feel” that it would appeal to the same demographic .

You sure can’t say that about “The Maltese Falcon” and “Casablanca”!

I think they did it better back then!

The "actual" sequel, The Black Bird, with George Segal as Spade Jr., is the stuff of dreary weekend afternoons, really. The only fun part is seeing the rude awakening - Spade's office building is now part of San Fran's inner-city ghetto and his secretary Effie seems to have turned the outer office into her apartment.

I used to have a newspaper clipping of when the statue was sold to Harry Winston jr. at an auction, and a Bogart lookalike was hired to "unwrap" it from a bundle of paper as part the event. I think the lookalike appeared in Hot Shots! and the Bogart episode of Tales From The Crypt. I recall Winston planned to used the bird as a storefront display on 5th ave. I don't know if he did.