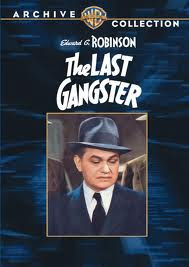 (Released: 2009 by The Warner Archive Collection)
Another looong DVD Review by Joe Torcivia

Summary: Arrogant gangster Edward G. Robinson gets his – and how!

But, wait a minute… Didn’t that already happen in “Little Caesar”? “Mother of mercy, is this the end of Rico?”, and all that?

Well, yes indeed it did! But this is an MGM film, not a “traditional” Warner Bros. gangster picture… and, apparently, they do things differently in the “Lion’s Den”. 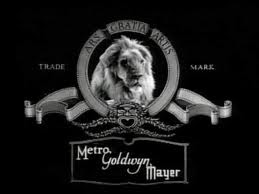 After receiving the “MGM Treatment”, you’ll find yourself wishing the poor guy WAS merely shot like Little Caesar!

It’s 1927 and Prohibition gangster Joe Krozac (Robinson) has risen to the top of the New York mobs. Leaving his first lieutenant “Curley” (Lionel Stander) in charge, Krozac sails off to “The Old Country” to take himself a bride.


The bride, “Talya” (Rose Stradner) comprehends little English, knows nothing of Joe’s gangster activities, and is the perfect individual to provide Krozac with the one thing his position as king of the mobsters cannot provide… a son! 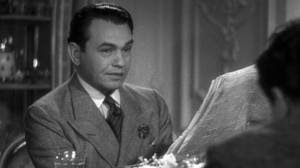 Upon returning to New York, Krozac finds that the rival “Kile Mob” has moved in on his Brooklyn territory. He orders the four Kile Brothers killed. One survives. Ironically, the three Kile corpses make the same front page, as the Krozac wedding!


Talya finds herself “with child”, just as the Feds bust Joe for tax evasion. He is shipped off to Alcatraz before even getting one glimpse of the baby.


Curley and Joe’s lawyer stick by him and attempt appeals… until the money runs out, and Krozac is abandoned to ten years on The Rock. Life is hard for the formerly regal mobster – now thrust among a scant few former friends (like “Fats”, played by Edward Brophy) and many enemies out for revenge, such as “Casper” (John Carradine). 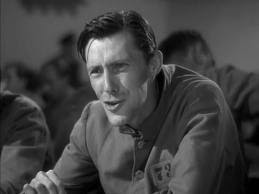 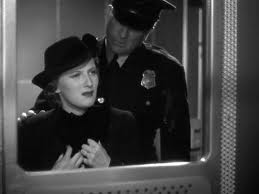 Over this time, Talya becomes more and more educated and aware of what swirls about her and son Joseph, Jr. On one of her visits to Joe, she falls victim to a schlock newspaper whose reporter (James Stewart) and photographer places a GUN with the baby – and runs an exploitive photo feature calling the boy “Public Enemy, Jr.”!

Stewart’s reporter, “Paul North”, regretful for what he’s done inadvertently finds himself in a relationship with Talya – ends up marrying her, and adopting the boy (now 10) and renaming him “Paul, Jr.” They live a completely happy, fulfilling, and idyllic life in a Boston suburb, while Joe rots away in prison.

And, avoiding any additional spoilers, it only gets WORSE for Joe Krozac when his ten years are up – taking us to the “present day” of 1937. 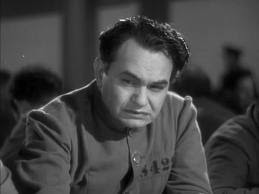 One indignity, pain, betrayal, frustration and/or heartache after another is piled atop this now-broken gangster to where (at least in the emotional sense) the end of “Little Caesar” looked like a picnic! EVERYTHING comes home to roost – and more! You really end up feeling sorry for the murderous gangster! This is a tack Warner Bros. never took!

“The Last Gangster” is a release of “The Warner Archive Collection”. Please GO HERE to read more about this relatively new enterprise from Warner Home Entertainment. .


As is our custom in these reviews, we’ll break it into CONS and PROS.

It’s Warner Archives: That means virtually nothing in the way of Extra Features. No commentary, subtitles, logical chapter skips – or even MENUS specifically designed for this movie. No background or “Making Of” featurette. No “Warner Night at the Movies” that I’ve loved so much in other packages! And, there is a needlessly limited choice of devices on which to play it, vs. standard DVD.


Robo-Promos: “Robo-Promos” is my term for advertisements that play automatically before you even reach the initial menu. Virtually ALL of the earlier Warner Archive sets, of those I’ve seen thus far, lead of with the same “Robo-Promo”:


“It’s time to get the movies you’ve wanted, but could never find, and add them to your film collection!”


“Explore the Archive today and discover hundreds of great stories, incredible performances, and rare treasures in Authorized Editions – on DVD!”

It’s Warner Archives: That means we get a film that would probably not garner sufficient support for a general release. Given a choice between “The Last Gangster” as a Warner Archive Collection release, or no release at all, I’ll gladly take a TWAC version.


I fear, as the DVD market contracts (what with downloading and most of the “best material” having already been released), more and more of the remaining as-of-yet-unreleased material will come via avenues such as this one. But, up to now, we’ve sure gotten a LOT of great stuff. More than I could have ever imagined some years ago. So, if the “last of it” arrives in this form… so be it.


The Extra Feature (Singular): Theatrical Trailer for “The Last Gangster”: (03:53)

An unusual trailer where Edward G. Robinson, formally dressed, speaks directly to the viewer… sometimes, with his silver tongue planted firmly in cheek:


“Most of my screen career has been concerned with portraying lawbreakers. At least ever since, by a quaint twist of fate, I was cast as Little Caesar.

“Well, it was all a lot of fun and very pleasant, up to a certain point. After a while, I became so imbued with the ruthlessness of the characters that I got to believing that I, myself, was really tough.


“Then again, my sleep wasn’t any too restful. Why, one night, I got up and found myself strangling my wife! …A lovely girl! And I was shouting at her: “Look here! This BED ain’t BIG ENOUGH for the both of us! One of us has GOTTA GO – and it ain’t gonna be ME! Mnyaah!


“Well? What was all the fighting for in the old gangster pictures? TERRITORY!”


Robinson goes on to describe the film as:

“…The smashing climax to all gangster pictures! It reveals the END of mobs and mobsters. It exposes, vividly, just what happens to our so-called “public enemies”, when Uncle Sam gets hold of them and puts them where they really belong – behind prison bars, made of triple steel”!

The Film: See the “first gangster” become “The Last Gangster”! Edward G. Robinson is in top form as Joe Krozac, showing all the snarling fury of “Little Caesar’s” Rico Bandiello, but this is a picture of a different stripe. A great complimentary piece to “Little Caesar”! 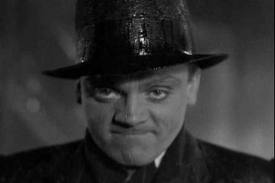 The story was written by William Wellman, who directed the classic Cagney gangster film “The Public Enemy”. The newspaper calling Joe’s baby “Public Enemy, Jr.” was probably a sly nod to that iconic film.

Edward Brophy is a former associate of Robinson’s character in this film and in “A Slight Case of Murder” reviewed HERE and “Larceny Inc.” to be reviewed soon. 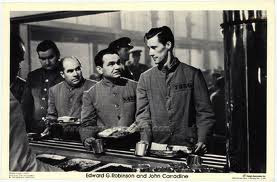 
• Lionel Stander as “Curley”. (Stander would also become the original voice of Buzz Buzzard in the Woody Woodpecker cartoons!)


• John Carradine as “Casper”. (…When he dies, he will make a decidedly “unfriendly” ghost!) 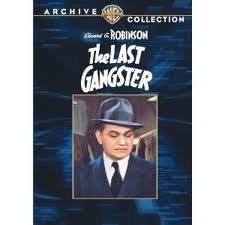 “The Last Gangster”, being a product of “The Warner Archive Collection”, and not a standard Warner Home Video release, must be reviewed and rated by a new and different set of standards.


There are no extras (…or no extras to speak of), and print quality is as good as the source material – with only minimal efforts at remastering. In the case of “The Last Gangster”, the print is generally sharp and good overall. 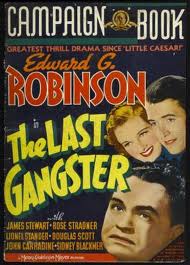 As a film, “The Last Gangster” is a pretty amazing take on how to make the gangster suffer without killing him. Rip his heart out instead! How I’d love for there to have been a commentary track on how this approach differs from the “traditional” Warner’s approach of the deserved violent end.

“The Last Gangster” is recommended for fans of Edward G. Robinson and the gangster genre in general, and for those fascinated with the time period and its filmmaking.
Posted by Joe Torcivia at 8:02 PM