A Series of “IMPLOS-ible” Events! 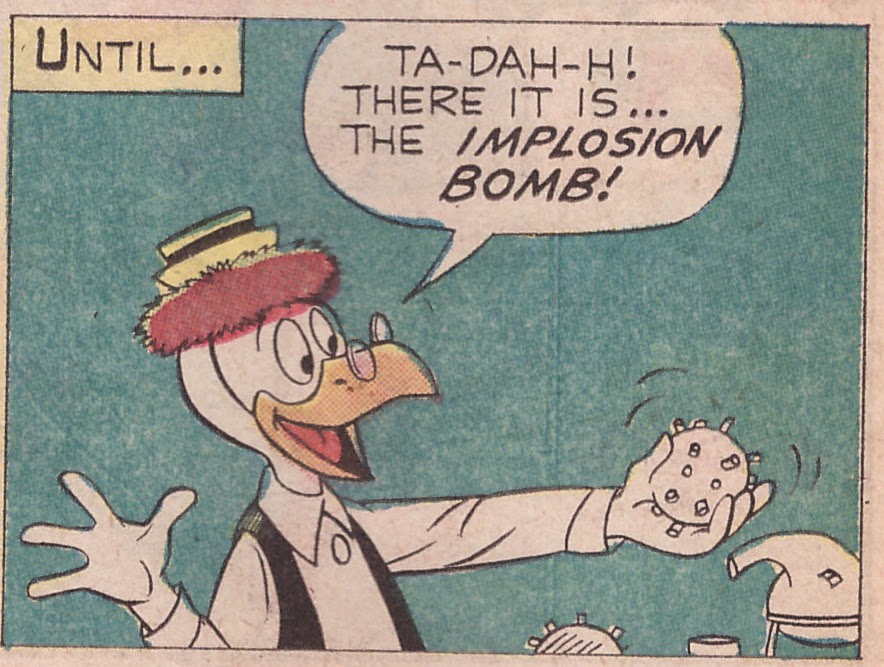 It’s always cause for celebration when Dan Cunningham posts one of his extremely detailed and well-researched posts on Disney comics (lower-case “c”), or Disney Comics (upper-case “C”), accompanied by a comprehensive look at the times and events that shaped them!

Today, Dan undertakes what we (thanks to longtime friend Dana Gabbard) have come to call “The Disney Implosion”.


Dan's focus is not merely the infamous and abrupt 1991 gutting of the briefly great line of Disney Comics (upper-case “C”) that began a mere 18 months earlier – but, as noted above, also the conditions leading to said “gutting”.  Dan provides vital perspective to those who “weren’t there” and a needed memory jog to those who were.

He wisely chooses to offer this essential history lesson in two parts (one now and one to come), because there’s just too darned much to cover in a single post.  And, in doing so, he gives me the opportunity to (part-gleefully, part-ruefully) say:

“The worst is yet to come!”

Go now, to THIS LINK, and relive events even I cannot believe took place 23 years ago!

Posted by Joe Torcivia at 9:02 PM No comments: 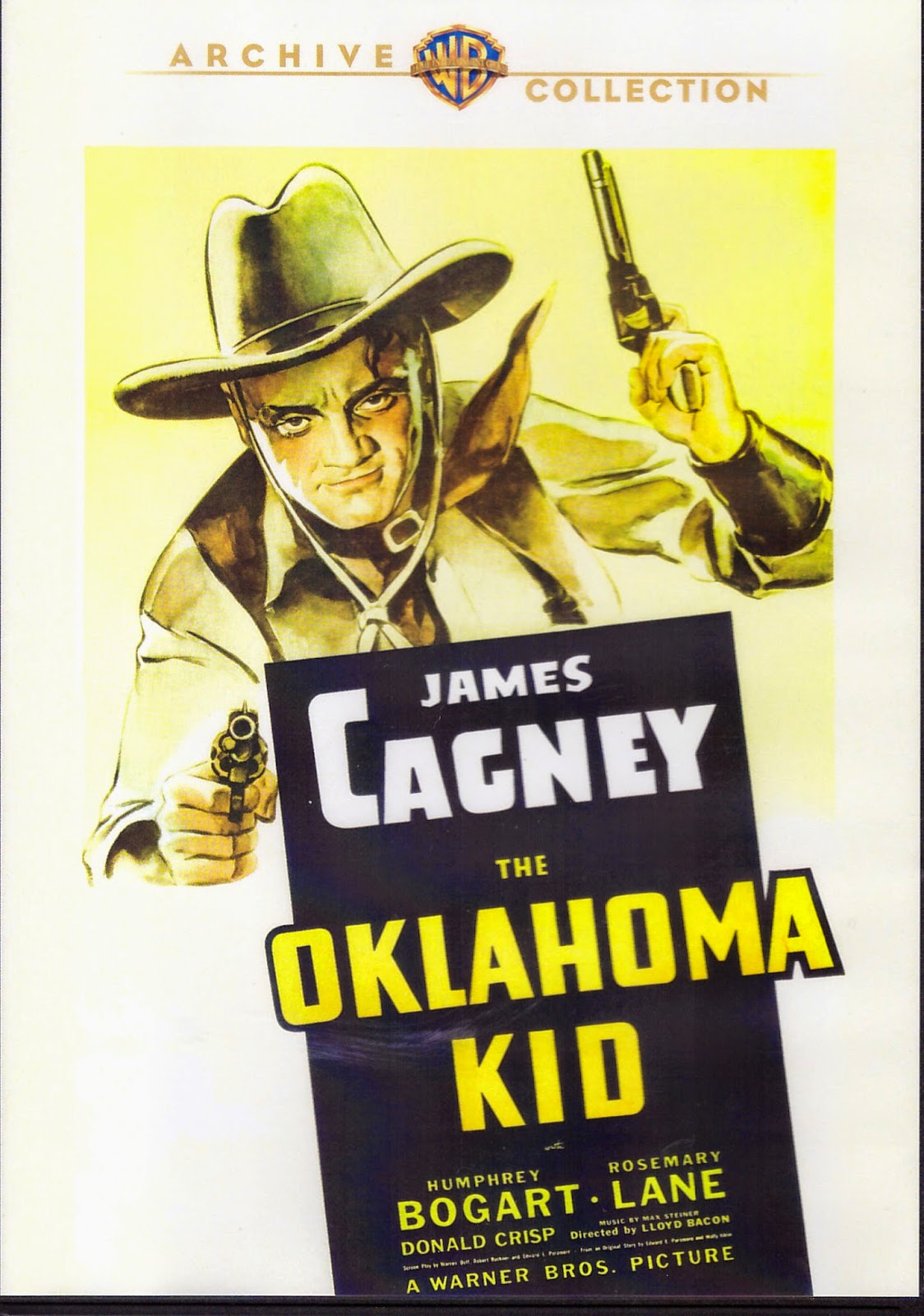 
Summary:  Cagney and Bogart in a western?  You must be (Oklahoma) Kidding! 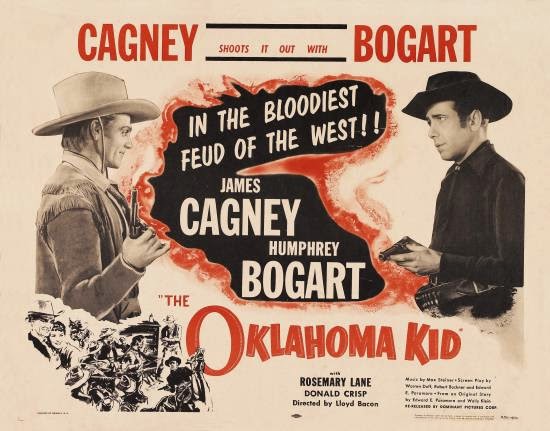 1939 is considered by certain film aficionados as the single greatest year in the history of the medium.  It’s kinda hard to argue, considering the likes of “Gone With the Wind”, “The Wizard of Oz”, “Wuthering Heights”, “Stagecoach”, “The Private Lives of Elizabeth and Essex”, “Mr. Smith Goes to Washington”, “The Hunchback of Notre Dame”, “Beau Geste”, and “Gunga Din”. 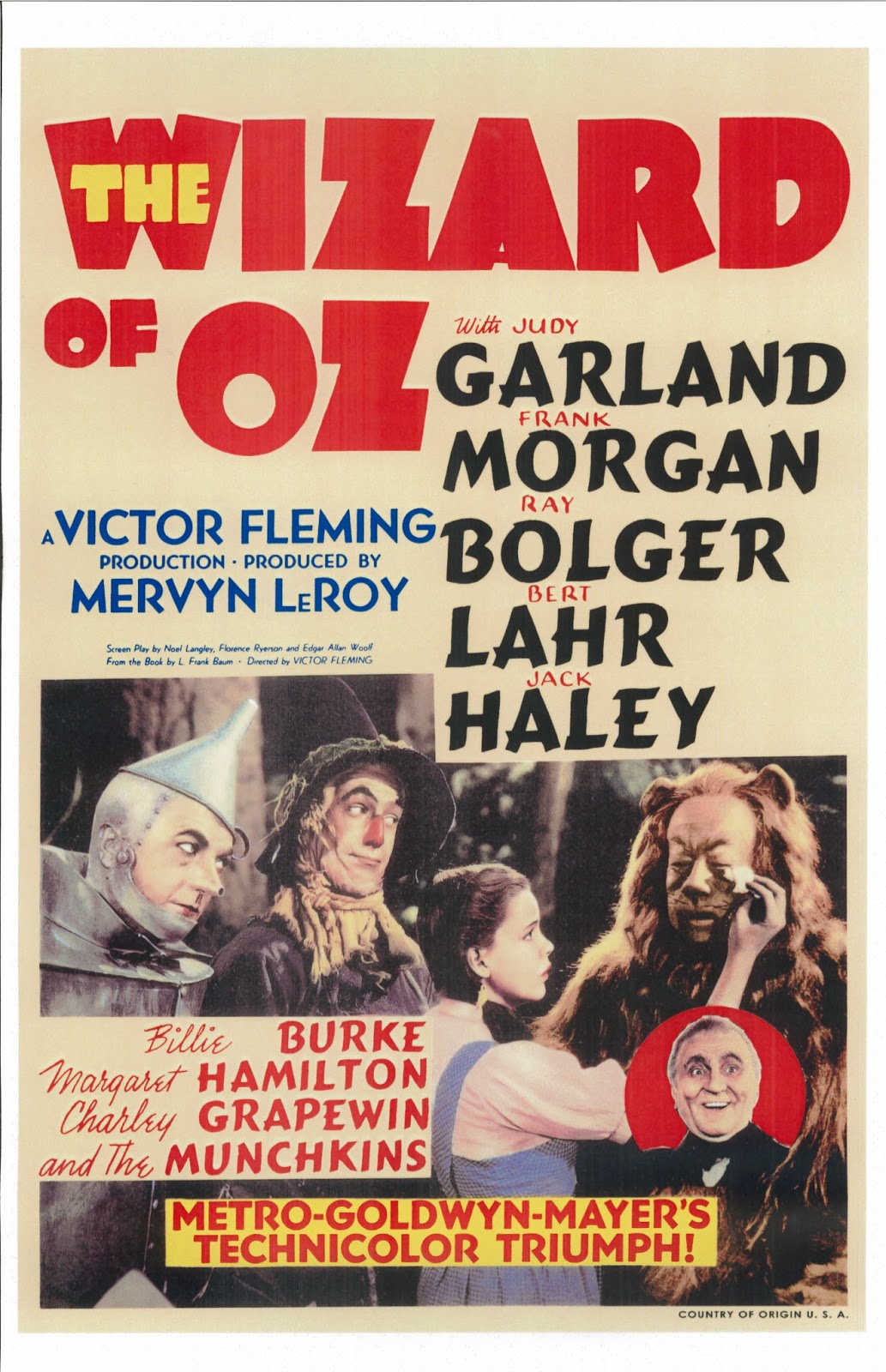 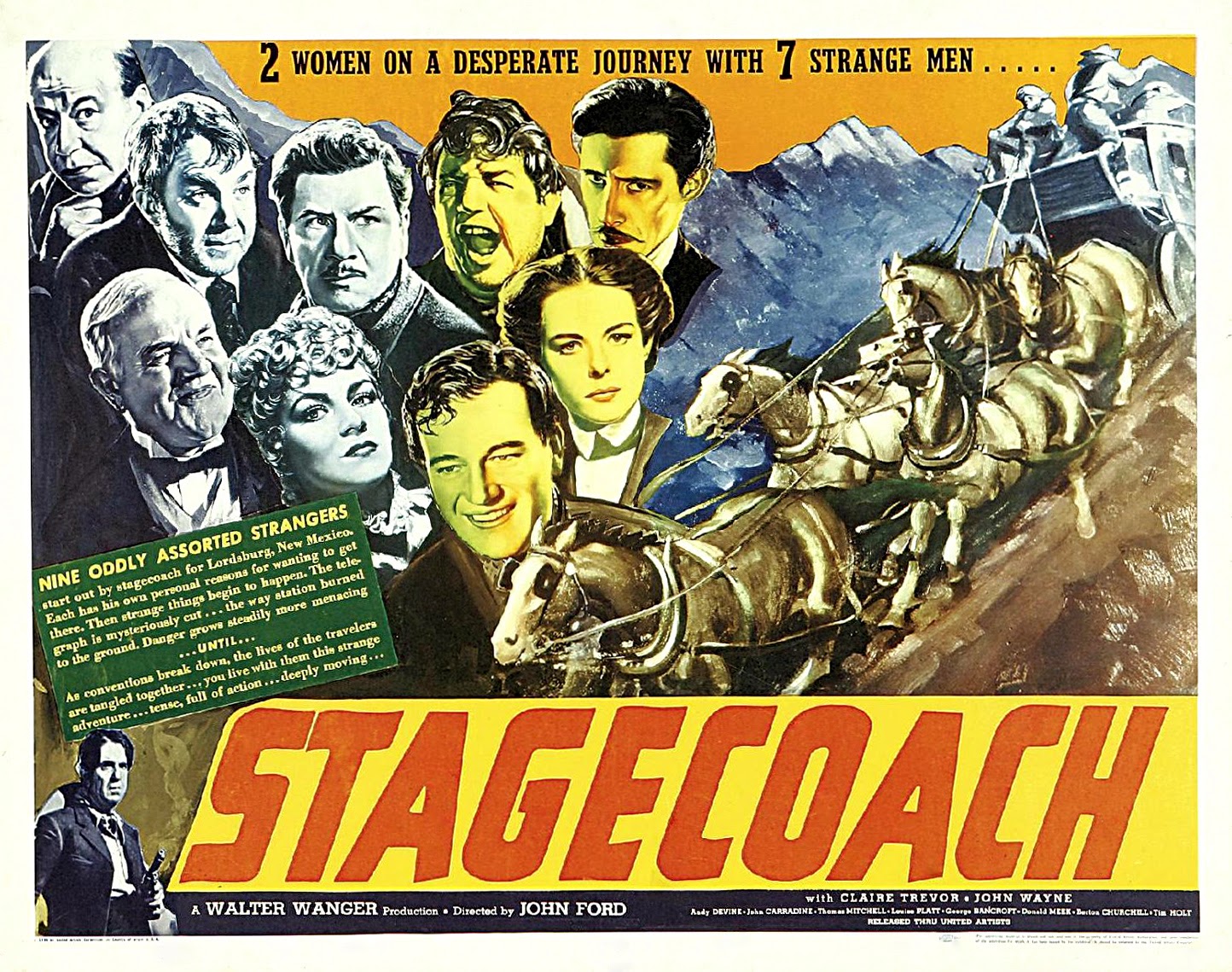 Master detectives were out in force, with two Sherlock Holmes pictures, three for Charlie Chan, one Mister Moto, and two for Boris Karloff as Mr. Wong.  Even Nancy Drew got into the act three times. 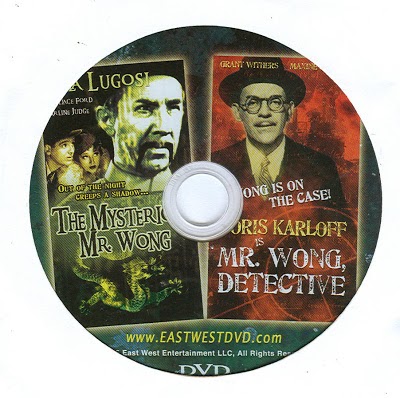 Other personal favorites included “Son of Frankenstein”, “Confessions of a Nazi Spy” (Supposedly the first Hollywood film to address the existence of Nazis!), W.C. Fields vs. Charlie McCarthy in “You Can’t Cheat an Honest Man”, and a bunch of shorts starring The Three Stooges. 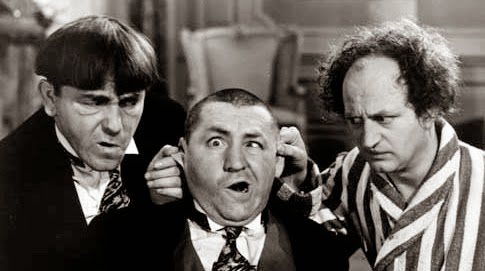 Why, even Laurel and Hardy got into the act with the great “Flying Deuces” and the early directorial efforts of Chuck Jones gave us one of my most favorite cartoons: “Daffy Duck and the Dinosaur”.   To digress, “Flying Deuces” and “Daffy Duck and the Dinosaur” get their own separate paragraph because both wind up with two of my all-time favorite endings of film comedy!
Skip the next five illustrations to avoid SPOILERS! 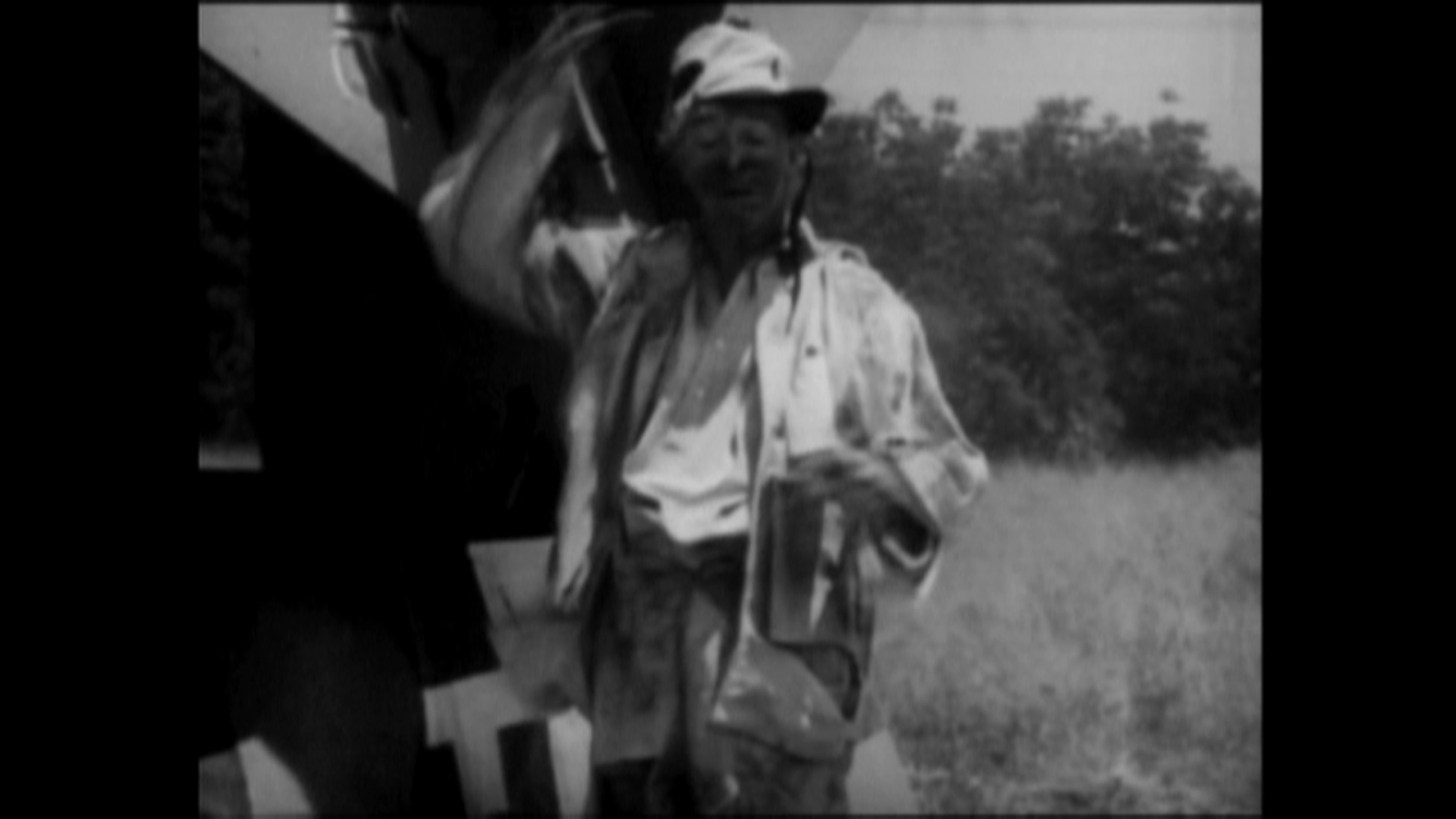 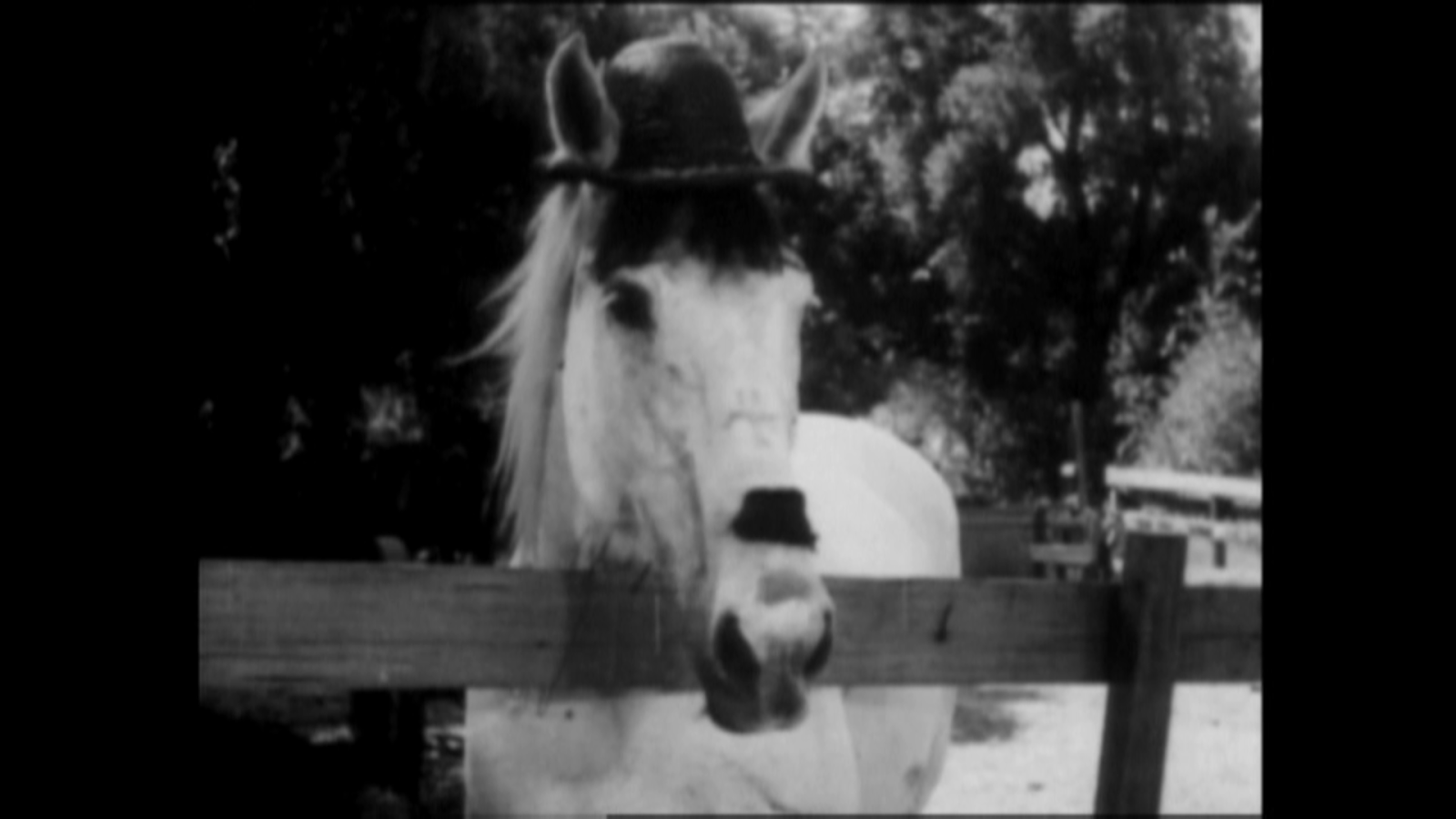 James Cagney and Humphrey Bogart also shared in the success and legend of 1939, together in “The Roaring Twenties”, and separately in “Each Dawn I Die” for Cagney, and “Dark Victory”, “King of the Underworld”, and “You Can’t Get Away with Murder” for Bogart. 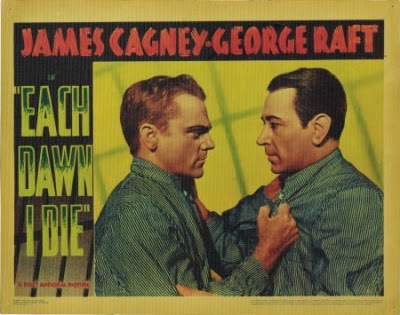 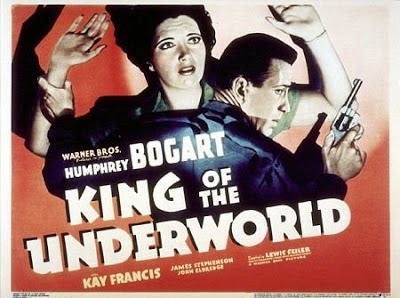 Chances are good I left out some great film of 1939, so please don’t kill me.  There were just too many to remember!

Yet, amid all this, someone had the notion of casting James Cagney and Humphrey Bogart in a western… and made it a reality.  Though, at times it seemed more of a surreal-ity. 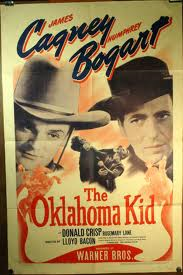 We open on President Grover Cleveland signing into law “The Indian Appropriations Act”, opening up the “Cherokee Strip”, land measuring 180 miles long and 50 miles wide, to anxious settlers.  The Native Americans, presently on the land, are to be monetarily compensated, and resettled westward. 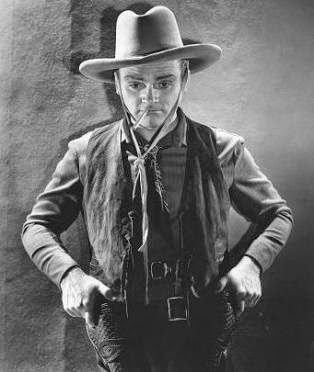 A train arrives, carrying the funds intended as payment for the Native Americans, which is transferred to a stagecoach for the final leg of the journey.  The coach is immediately robbed by Bogart (as “Whip McCord”), fittingly attired head-to-toe in black, and his gang. 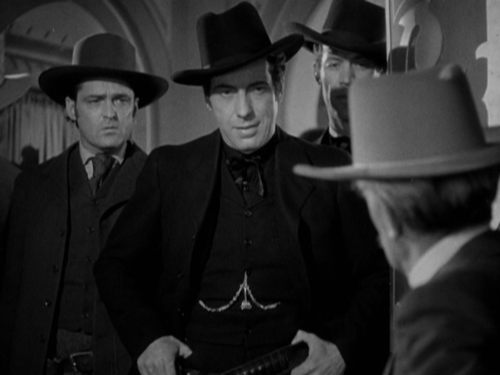 But, before the Bogie-Bunch can break-away with their booty, in rides James Cagney, pausing momentarily for a close-up against an expansive Western sky – with the camera lens almost “irising-in” on him to catch the heroic glint in his eye!  His name is “Jim Kincaid”, though WE (the viewers) don’t know that.  To us he is “The Oklahoma Kid”, known as a bad guy but, in actuality, the hero of the picture. 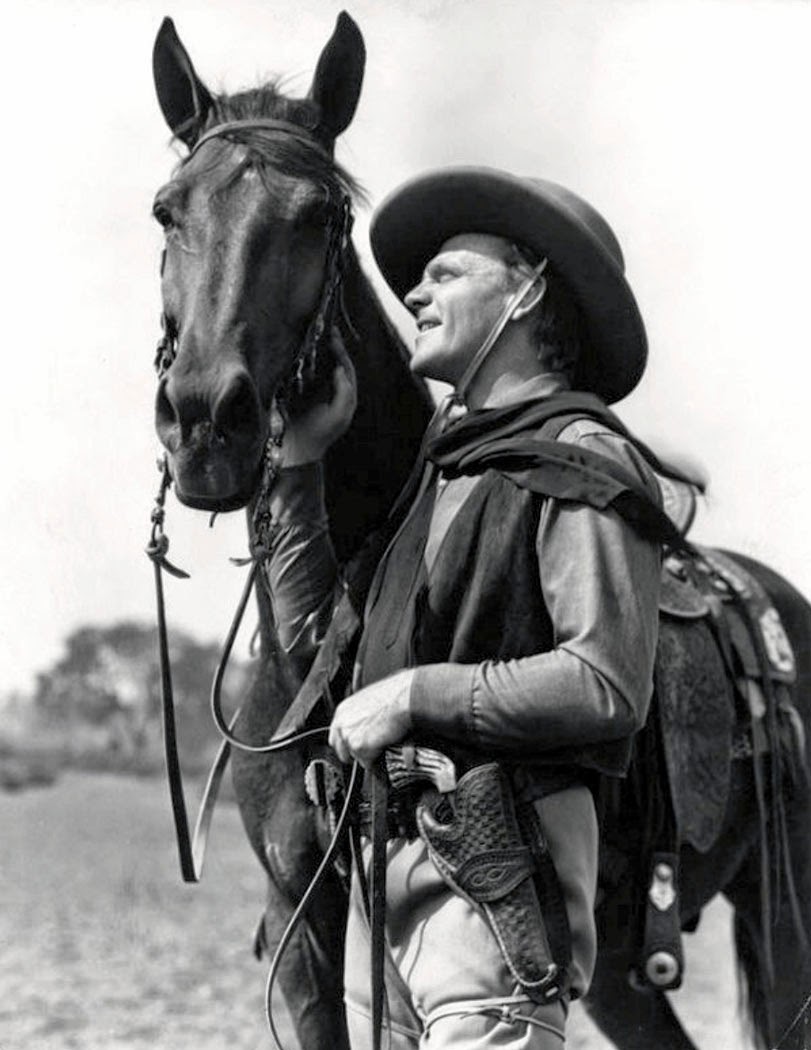 Observing the hold-up, he rides ahead of the bandits, via one of those convenient ‘round-the-rocks shortcuts, and lassos the horse carrying the bag of loot – recovering it to an appropriately heroic musical crescendo!  ...Surprisingly, however, he keeps it for himself, the rascal!

BIG ON-SCREEN TEXT:  “Cherokee City – Springboard to a new territory.  Boomers [JOE’S NOTE: You mean my “very special, postwar generation” was around back then?  If so, what “war” did they “post”?], eager to drive their stakes into fresh rich earth, are held by ‘The Sooner Law’ until the starting gun the following day…” 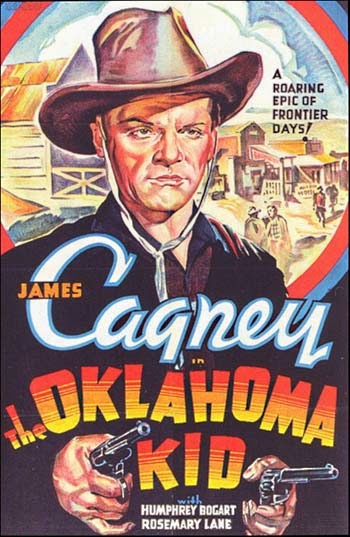 ﻿
Apparently, a land rush is on, kicked off by a ceremonial starting gun.  “John Kincaid” (father of Jim, from whom he is estranged) and his group intends to move out first and stake a claim for a town – that would, one day, become Tulsa, Oklahoma.

A sign warns: “Don’t be a SOONER!  Persons caught entering the Cherokee Strip before 12:00 Noon forever forfeit their rights to claim any land!  THIS MEANS YOU!”

So, a “SOONER” means a CHEATER?  I’ll never be able to watch Oklahoma college football again!  Unaffected by it all, Cagney’s Jim Kincaid just hangs back and smiles, as if contemplating his bets on the “Oklahoma Sooners” football game. 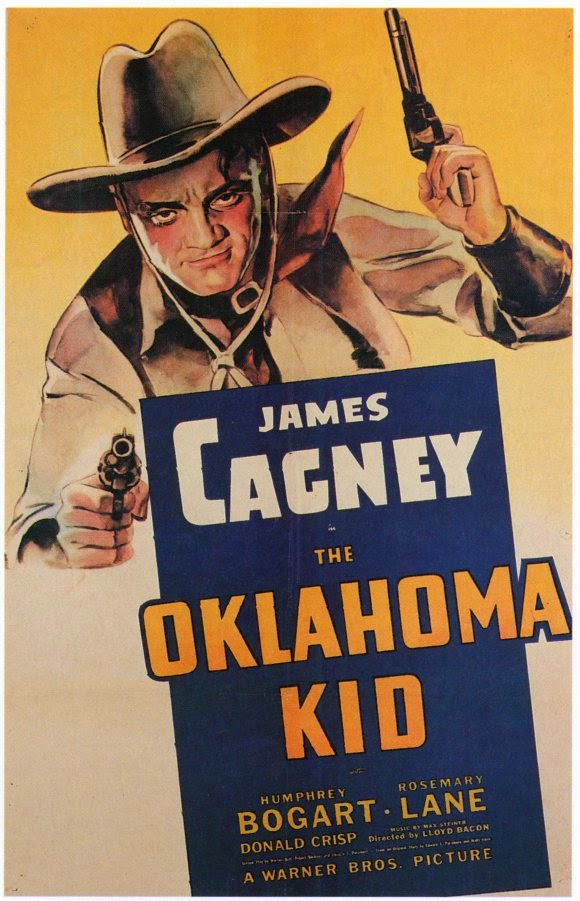 Soon (but not “sooner”), the race is on – and in 1939 cinematic semi-spectacle.  Some if it looks new, while some of it looks more like older stock footage of horses, riders, and wagons.

Cagney’s Kincaid offers an interesting take on why he, despite being a good guy, believing in “fair-play” and all that, has no interest in the land rush:

KINCAID:  “The white people steal the land from the Indians, right?”

JUDGE HARDWICK:  “But, they got paid for it, didn’t they?”

KINCAID:  “Yeah!  A measly dollar and forty cents an acre – price agreed-to at the point of a gun!  Then, the immigrants sweat, and strain, and break their hearts carving out a civilization!  Fine!  Great!  Then, when they get all pretty and prosperous, along come the grafters, and land-grabbers, and politicians – and, with one hand, skim off the cream and, with the other, scoop up the gravy!  Not for me!”

Meanwhile, Bogart’s Whip McCord – being the Sooner, we all expected him to be – HAS ALREADY STAKED the claim John Kincaid desired for his band of settlers.  Boo!  Hiss!
McCord, however, has no interest in the land itself but wants exclusive rights to all saloons and gambling houses in the new settlement.  Rather than press further on into less desirable territory, John Kincaid reluctantly agrees – and Tulsa, Oklahoma is born.


Tulsa takes shape over a nice montage of the land being cleared, staked, and growing from a humble “tent-city” to an actual western town.


The elder Kincaid opens an honest bank, while McCord opens a saloon and gambling hall.  Who gains the upper hand in the battle for the hearts and minds of the settlers?  Let the on-screen text tell you:


Banker John Kincaid runs for mayor as a reformer – but he is framed for murder by Whip McCord.   Can his son, Jim Kincaid aka The Oklahoma Kid, come to dear old dad’s rescue?  And, can we look forward to another great Cagney vs. Bogart cinematic climax?  Watch the film and find out, ‘cause we don’t do spoilers!


But, we will offer up one more highlight:

On the night before the Land Rush, with nowhere in town for the Oklahoma Kid, Judge Hardwick, and his daughter Jane to lodge for the evening, Cagney’s “Kid” clears out a hotel room, occupied by about 16 sleeping “boomers” waiting for the morning’s rush to come, using a marvelously humorous tactic that we would come to associate with another Warner Bros. star, by the name of Bugs Bunny!

The Kid bursts into the room, in the middle of the night, and starts yelling:

And, as if occupied by an army of “Yosemite Sams”, the room frantically clears out – leaving it for Cagney to turn over to the Judge and Jane.  Gotta love that! 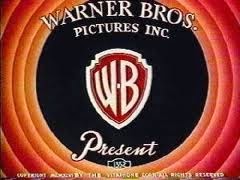 Finally, for the animation enthusiasts out there:  We have more SOUND EFFECTS in this film that were later “ported-over” to various Looney Tunes and Merrie Melodies cartoons.  Of course, the various “gunshots” were reused, but also the distinctive PUFFING and WHISTLE of the TRAIN, carrying the funds for the Oklahoma land payments, was featured throughout the Tweety and Sylvester cartoon "All A-Bir-r-rd"  (1949) You can just hear it now, can’t you? 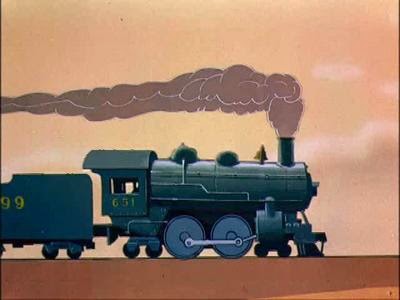 As is our custom in these reviews, we’ll break it into CONS and PROS.


By now, we’ve gone over the general debits and credits of The Warner Archive Collection in great length in other such posts.  Suffice it to say these are general “No-Frills” releases, pressed in the DVD-R format, which will not play on a computer. 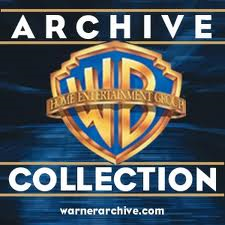 No Extra Features, save a Theatrical Trailer – and even that is not always guaranteed.  No subtitles, alternate language tracks, or other expected amenities of the DVD viewing experience.
﻿

All the expected stuff outlined above. 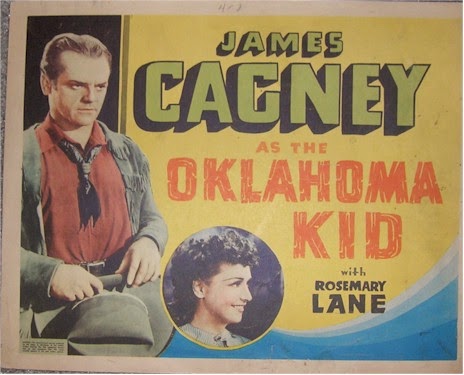 Narration from Robert C. Bruce (The Voice of Warner Bros.):  “Oklahoma!  Its forbidden frontiers at last flung open to a nation’s land-rushing pioneers!   A virgin empire to be claimed by the swiftest, and held by the strongest! 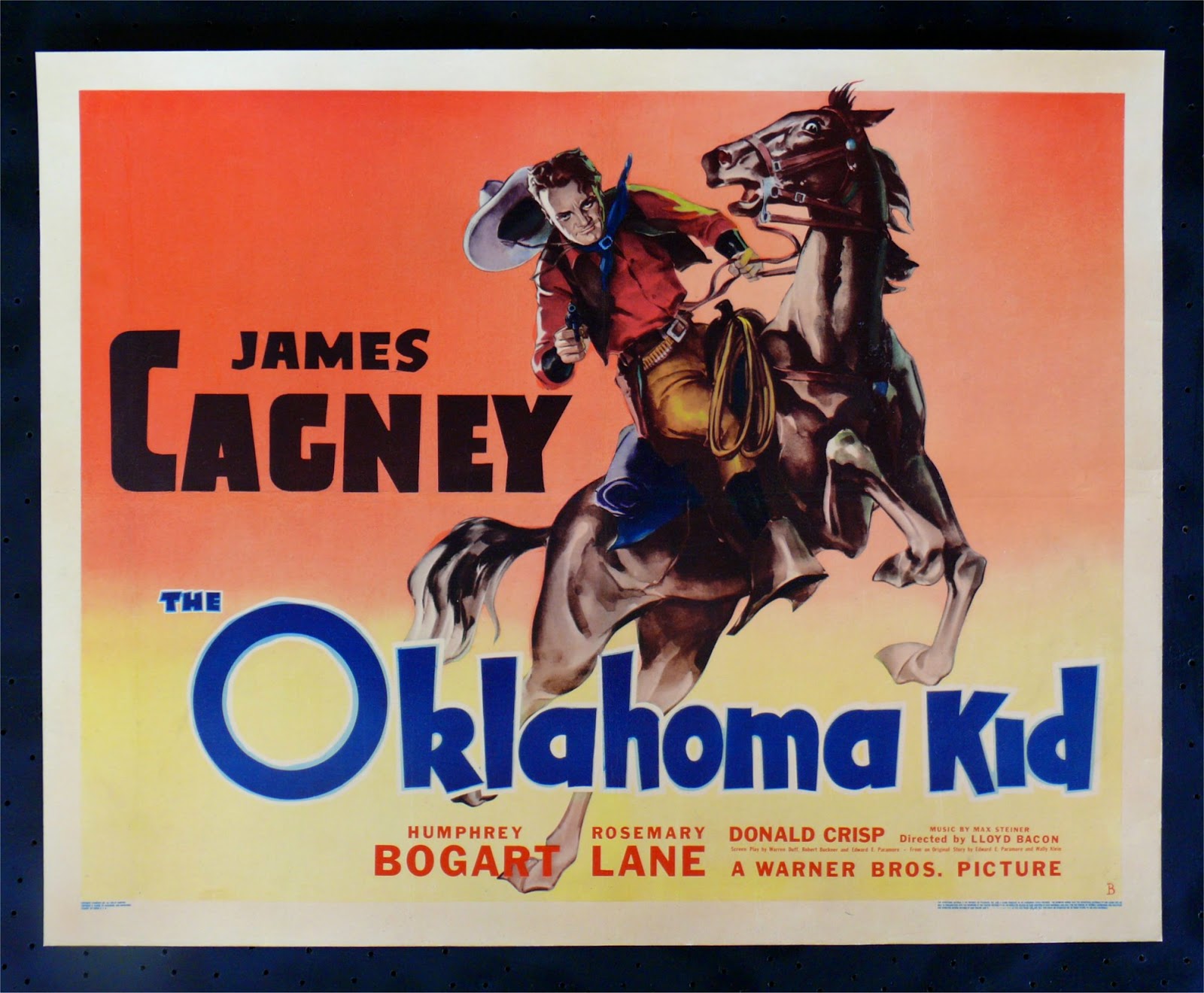 “Into this turbulent battleground, rides a mysterious figure [ JOE’S NOTE: We see an image of Cagney, on his horse, rearing-up against an expansive sky. ], destined to carve a glorious place among the conquerors of the West! 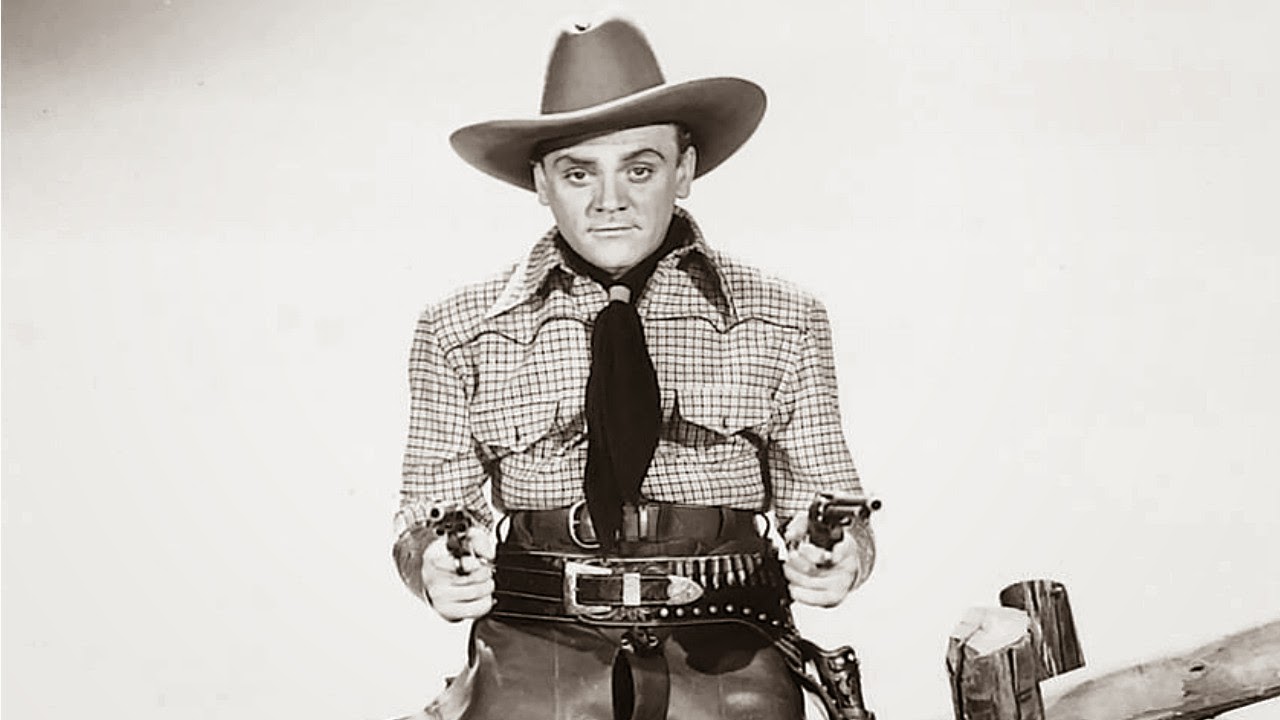 “A reckless adventurer, whose single-handed fight against injustice makes him a hunted outlaw!  His daring, the driving force behind the creation of an empire!  His gun, the only law feared by its plunderers!  An avenging terror – wanted dead or alive – THE OKLAHOMA KID!”
LARGE ON-SCREEN TEXT: “James Cagney – Blazing into action in the screen’s mightiest epic of the West!  [ JOE’S NOTE: …Um, ya think John Ford and John Wayne MIGHT hold a differing opinion?  Just sayin’!]


HUMPHREY BOGART (as Whip McCord):  “This is MY TOWN, and nobody’s gonna run me out of it!  If The Kid wants to shoot it out with me, I’ll be here!”
CAGNEY:  “Listen, I learned this about human nature when I was about so-high… and that is the strong take away from the weak – and the SMART take away from the strong!”

CAGNEY (pats his gun): “THIS is the only law that I know is worth a hoot in this part of the country!” 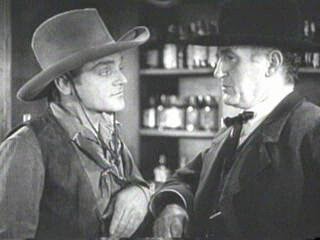 LARGE ON-SCREEN TEXT: “Thrill to the SURGING DRAMA of an empire in creation!  James Cagney as the pioneer hero of America’s westward march!  Humphrey Bogart as the most dangerous desperado of the Bad Lands!  History is made when they fight for supremacy!


“THE OKLAHOMA KID, with Rosemary Lane, Donald Crisp, Harvey Stephens, and a cast of thousands!  Warner Bros.’ glorious cavalcade of the great South-West!” 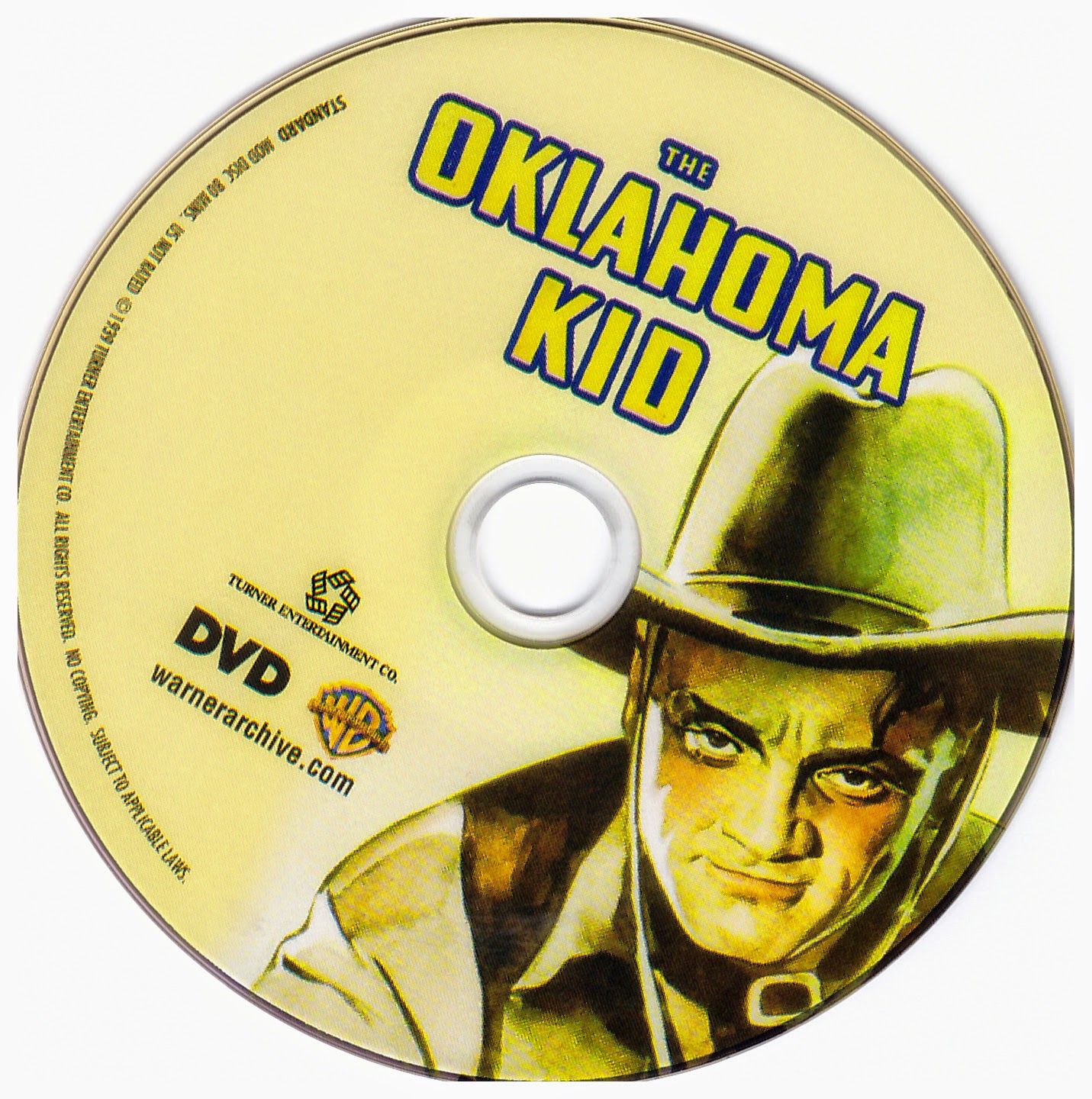 One could even say it was "camp", before there WAS "camp"!  …What’s not to love! 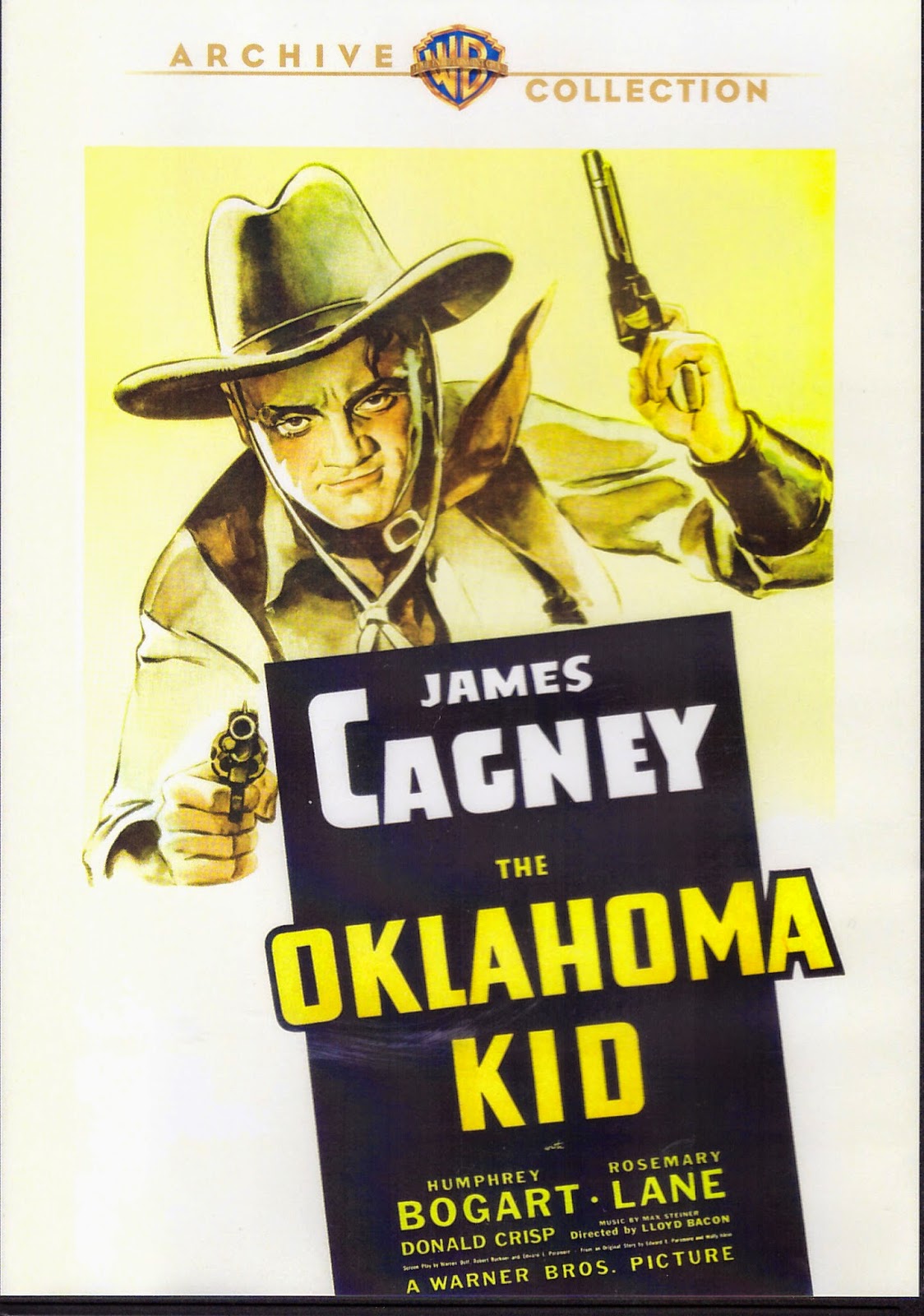 “The Oklahoma Kid” is highly recommended for all those reasons – and the unforgettable image of Cagney’s “Kid” blowing the (gun) smoke from the barrel of his gun, each time he takes revenge on a member of Bogart’s gang! 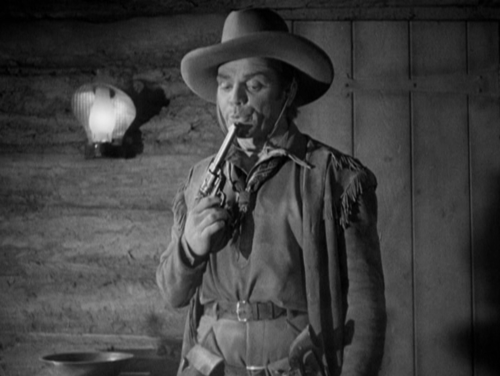