Adventures in Comic-Boxing: WHO ELSE Finds Pirate Gold? 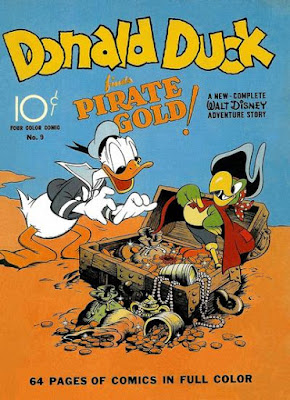 He "found it again" in this more recent issue... 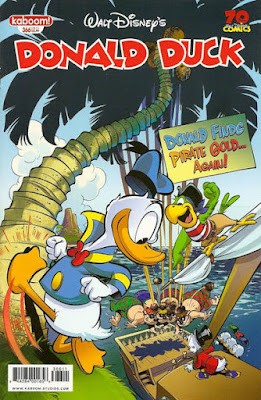 ...Along with an intrusive UPC code.

But, along the way, there were others... 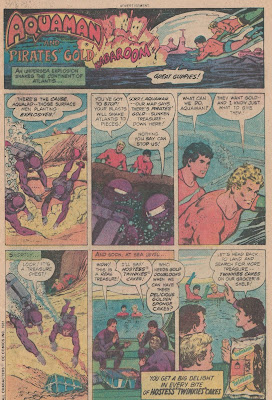 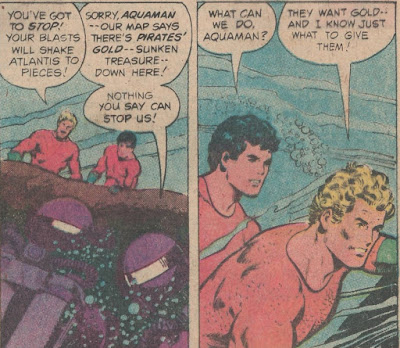 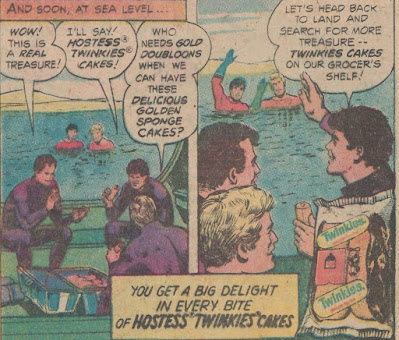 A charming ad. As much as I like Twinkies, though, the premise of this one is a bit absurd. It's hard to imagine that explorers looking for gold would be dissuaded from their quest by Twinkies. At least in the Joker ad you shared a few weeks ago, the cops enjoyed the cakes but that didn't distract them from their mission of bringing the Joker to justice. Now, maybe *Twinkie the Kid* might be able to convince trespassers to vamoose. But a box of Twinkies, the inanimate kind? Again, as much as I like Twinkies, I doubt it. Of course, part of the charm of these ads is how absurd their premises can be. How can you not smile at the thought of finding a treasure chest filled with Twinkies, and of explorers saying that works for them and they'll go on a quest to their local grocery store instead?

The absurdity, along with the authenticity of the different visual styles, was the great charm of those ads.

The ad implies that Twinkies are SO GOOD that they’d cause you to abandon your quest for “pirate gold”! Perhaps if Donald Duck, his intrepid nephews, and Yellow Beak the parrot had only thought to use Twinkies to dissuade Black Pete, much Disney comics history would be changed!

I’m with you in liking Twinkies (…who doesn’t?) but, if I felt I had a reasonable chance of actually finding the (sought after by so many comics and animated characters) “pirate gold”, I’d just buy a boatload of ‘em with the fortune I’d derive from said gold – and eat ‘em until I turned yellow ‘n’ white, an’ soft ‘n’ spongy, but that’s just me!

I’d be more likely to beat feet (…beat flippers, actually) if Aquaman stood in my way… or even Black Pete! Best case, I could stand aside, let Aquaman capture Black Pete, and surreptitiously swim-off with the gold when no one is looking!

A few more “Great___s” come immediately to mind: “Great Krypton” and “Great Rao” (both from Superman) and “Great Thunder” oft used in sixties comics like Rip Hunter Time Master, Blackhawk, and even Admiral Nelson in the comics version of Voyage to the Bottom of the Sea – even though he never said it on the TV show! I suspect all the “Great Thunder”s were the product of one writer, like France Herron or Gaylord DuBois, who wrote many different comics of the period.

I can’t imagine I didn’t leave out many well-known “Great___s” so, anyone who cares to, jump in with some of ‘em – we’re right here!

In addition to Donald Duck, Yellow Beak, Aquaman, Aqualad, and the divers--I think somebody else struck "pirate gold"--with this post!

Not where I thought it was going, but "a big delight" nonetheless! Thanks!

And, hey... I *did* promise more Hostess ads, didn't I? And I'll promise still more.

I *have* heard someone say "Great Scott!" in real life, as it happens. My favorite exclamations by comic book characters are those in the Lumberjanes series, where the girls exclaim with the names of great women: "Holy Mae Jemison!" "For the love of Mary Anning, a pack of dinosaurs?!" "What in the Joan Jett are you doing?"

"Great Guppies!" is pretty lame, I'd say. I'd go for some more impressive creature: "Holy Squid!" has a nice ring to it.

I’m not certain “Holy Squid!” would have fully passed muster in those more cautious times.

WHOA! You actually heard someone say “Great Scott!” in real life, and you’re just going to let it hang out there?! Not asking for names, or anything that might be private or personal, but I’d sure like to at least know the context in which it was uttered.

And no cheating like…
SCOTT: I’ve got the project wrapped-up, on time and under budget, Mr. McDuck!
SCROOGE McDUCK: Great, Scott!

Finally, any comic that references Joan Jett – especially as a “great woman” – immediately rises in my estimation… says the guy who had all her albums, and saw her live about 5-6 times!

I didn't say any more about the context of "Great Scott!" because it was completely unremarkable and unmemorable. I knew someone who said that at the times other people might say "Good heavens!" or "Holy cow!" Enough so that I've long thought of it as just "one of those things people say." From what you say, I guess that people in general don't say this!

I have heard “Good heavens!” and “Holy cow!”, especially the latter being a New York Yankees fan and hearing beloved Yankees broadcaster Phil Rizzuto say it over and over again – long before the days where *every* sportscaster had their own requisite catchphrase. …Heck, I even use it myself, when the “more frequently used alternative” is not appropriate.

But I’ve never heard “Great Scott!” uttered by a human being who was not acting! Then again, I’ve lived all of my life in the New York metro area – and have never lived more than 45 miles outside the city itself, at my furthest point – so, maybe it *is* more common elsewhere… at least in the early-mid 20th century.