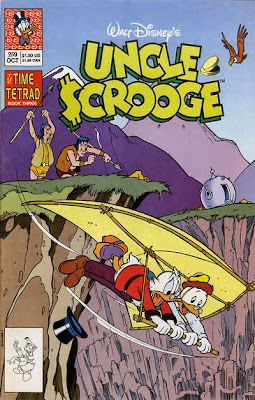 So that we may celebrate New York Comic Con Week 2013, here, with warts and all, is my original Comic Book Review of UNCLE SCROOGE # 259, (almost) exactly as I prepared it in 1994.

You’ll see differences in the overall form vs. today's reviews (No “Cons” and “Pros”, for instance.) but, in content, it’s not all that different from what I’d write today.  Any “additions for the sake of clarification” will appear within BRACKETS [ like this ].  And there will be lots of illustrations - something not possible in the "old days".

This was the FIRST such review I ever did, and made up the bulk of the first installment of THE ISSUE AT HAND APA and Fanzine Column, which was the forerunner of TIAH Blog!   So, be kind, patient, and understanding, as this is an illustrated recreation of my first foray into (as we say up top) “The Things That Interest Me”.  Click on any of the comic images to enlarge, and ENJOY… 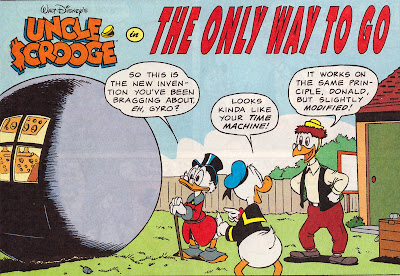 Donald [Duck] accidently transports himself to “the island of Tierra Del Fuego at the southern tip of South America”, while Poking around Gyro [Gearloose’s] latest invention, the D.R.A.K.E.  (Dimensional Realizer and Kinematic Explorer).  Scrooge and Gyro set out to rescue him, and it is their interaction which makes this tale a memorable one.

In fact, having the pair thrown into an adventure situation together is so much fun that it’s hard to believe that something as unlikely as a Second Class Mailing regulation kept Carl Barks from teaming them up in the past.

For those who are unaware of this particular oddity in Disney comics history, in order to secure Second Class Mailing privileges for subscription copies, Western Publishing [ the publishing entity behind Dell and Gold Key Comics] had to schedule at least TWO stories per issue of a title… with one story featuring CHARACTERS WHICH DID NOT APPEAR IN ANY OTHER STORY in that same issue.  Don’t ask ME!  This, rather than any creative decision, was the reason that the GYRO GEARLOOSE short stories came into existence. 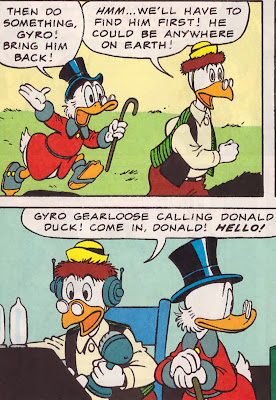 Amazing, but true.  We have the Postal Service to thank for the development of one of our most cherished [original Disney comic book] characters, not to mention the end of 32 page book-length stories (such as the grand Donald Duck adventure “Lost in the Andes”, 1949) in any comic series released by Western Publishing on a mail subscription basis.

Oh, but back to Scrooge and Gyro…

Gyro’s addition to the mix offers a large number of humorous possibilities not found in the more traditional Scrooge / Donald / Nephews adventures. 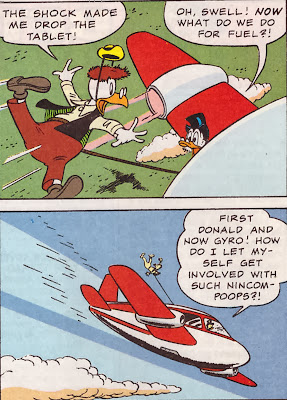 Some years ago [in my earliest fanzine writings], I termed Gyro as “…an accommodating source of miracles”, and he does not disappoint us here.  During the course of this adventure, he propels a life raft with his “Solar Powered Eggbeater”, combines the eggbeater with some rope, driftwood and “razor clam shells” to create a device capable of cutting through the thickest brush, and provides escape from captivity with his “Atomic Pocket Knife” (!).  …And they say the JUNIOR WOOKCHUCKS are “always prepared”! 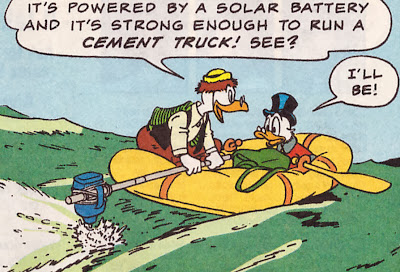 When confronted with the final obstacle, the scaling of a sheer, icy cliff, both Scrooge and the readers are expecting Gyro to conjure up another miracle of an invention.  Instead, to our surprise and delight, he produces ordinary TENT PEGS and ROPES for the climb. 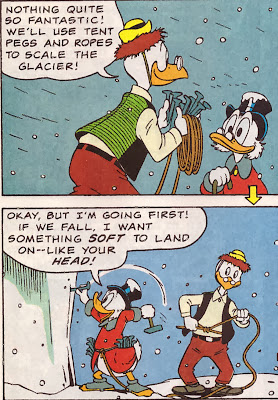 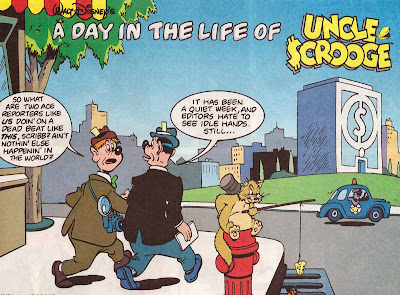 A DAY, you say?  This little gem distills many of the elements which Carl Barks used to make the UNCLE SCROOGE series great, into a mere ten pages – and hurls them back at the readers at breakneck speed!  Particularly humorous is Scrooge’s five panel, casual dismissal of Glomgold, whose previous challenges sparked Barks’ lengthy adventure classics “The Second Richest Duck” (1956) and “The Money Champ” (1959). 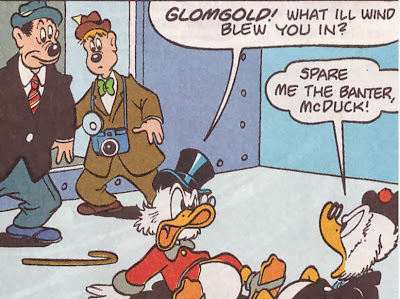 “I tell you, some people've got no sense of PRIORITIES… or TIMING!”  declares Scrooge, as he literally bowls-over his rival while rushing off to tend to the next crisis. 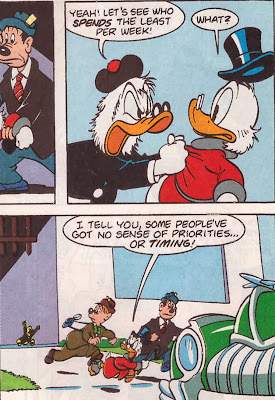 Both stories in this issue showcase the talents of the “Gutenberghus / Egmont Group”  (the producer of Disney comics based in Copenhagen, Denmark) at their best, delivering solid art by the ever-reliable Vicar and something extra in the way of humor and unexpected twists.

Other Items of Note:

This issue was the THIRD of FOUR, in that month, to fall under the umbrella title “The Time Tetrad”, along with the same month’s issues of DONALD DUCK ADVENTURES, WALT DISNEY’S COMICS AND STORIES, and DUCKTALES.  Never intended to tie together, three “adventures in time and dimensional travel” were grouped by sharp-eyed editor Bob Foster, and were added to a new two-part story produced for DUCKTALES to manufacture a sort of title “crossover” event.
Featured in this month’s Disney Comics subscription ad is DARKWING DUCK.  A *twelve-issue*  subscription is offered.  Hmmm… Wonder what went wrong!


I humbly direct you to the Letter Column where I discuss the reasons that the new story in UNCLE SCROOGE # 257 may very well be the first Scrooge adventure to take place after DUCKTALES.

Yes, I know “A Day in the Life of Uncle Scrooge” was later reprinted by Gladstone Series II, with vastly inferior dialoguing.  But, I didn’t know that in 1994. 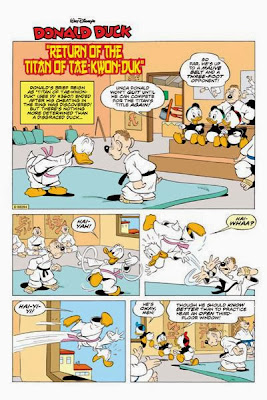 We can discuss these points and more in the Comments Section.  Meanwhile, thanks for reading this curio of “TIAH Days Gone By”, while I’m off to New York Comic Con 2013!

Even when I was about eight or nine, I had some vague understanding of a postal regulation requiring that comics have a certain number of text pages. (I think I first read it in a Charlton comic; a fan's letter complained about the one-page text stories, and the editor's reply explained why they had to include them.) I never knew about a requirement for one story with characters who did not appear in that issue's other stories, though. That is, not until your post on Daffy Duck #36. Another example of "live and learn." -TC

Speaking of live-and-learn, I had never heard of the song "A Cup of Coffee, a Sandwich, and You" before reading that Duck Comics Revue that you linked. I thought "Coffee, Louie, or Me" was a parody of "Coffee, Tea, or Me?" That was a book in the late 1960's about airline stewardesses. It seemed to be pretty risque for its time, although it would probably seem tame and quaint today. Of course, maybe the book title was an allusion to the song. I would have thought both the song and book would be unfamiliar to most readers (even adults) in the 1990's. The main thing I remember from that US issue has to do with the running gag of Donald having been in the Navy instead of some other branch of service. In one scene, he says "calvary" when he obviously meant "cavalry." A common error. -TC

Funny thing is that the concept of the arcane postal regulation was one of the first things I learned, upon discovering Barks fandom.

Why? Because it was the reason for the Gyro Gearloose short stories. And, across the Dell and Gold Key lines: The Goofy stories in DONALD DUCK, Tweety and Sylvester in BUGS BUNNY and DAFFY DUCK, Cave Kids or Perry Gunnite in THE FLINTSTONES, Chilly Willy in WOODY WOODPECKER, O.G. Wottasnozzle in POPEYE, etc.

Harvey Comics did this as well, with Spooky in CASPER, Herman and Katnip in BABY HUEY, etc.

Even DC, in those days, had those gag strips (most often by Henry Boltinoff) like “Casey the Cop” and such. And every comic had at least one page of TEXT which, in DC Comics, evolved into the letter columns. Marvel somehow managed to sidestep the “Guest Story” requirement, though they had the text-becoming-letter-columns as well.

And, imagine… You learned of this in a Charlton Comic, of all places!

That’s what I truly enjoy about these exchanges!

To your second comment: I also thought the title was a riff on “Coffee, Tea, or Me”. As you say, “Live and Learn”! “A Cup of Coffee, a Sandwich and You” can be heard in almost any Warner Bros. cartoon where someone is preparing for a meal. Or, Pete Puma is about to ask for “lumps” (of sugar). It was a “go-to piece” for Carl Stalling.

But, as long as we’re going “all risque”, maybe we could call the second story in the issue (about the reporters following Scrooge) “Everything You Wanted to Know About Scrooge, but Were Afraid To Ask”!

And, as an alternate gag title to my script for “Donald Duck Finds Pirate Gold Again”, I submitted “I am Curious (Yellow Beak), knowing it would be laughed-at and rejected. True story! ...And, you'll find it nowhere else!

Following up on the above exchange with TC, I thought to expand upon the postal regulation and its effect on Dell and Gold Key Comics (and on comic books in general) in my own words, but I found the perfect existing piece to illustrate the point, and I will quote it here.

It comes from Page 512 of Book Two, of Volume Three, of the hardcover Carl Barks Library (UNCLE SCROOGE 1-20) published by Bruce Hamilton’s Another Rainbow Publishing (…material within brackets is mine, for added clarity):

“The Gyro Gearloose back-up stories that began in UNCLE SCROOGE 13 came about as a result of Western’s applying for a second class mailing permit for the comic.

“To gain second class mailing privileges a periodical must contain at least two stories, one featuring different characters. Barks turned to Gyro Gearloose, the wacky inventor, to provide the required second feature. [Let’s assume the “Text Page requirement”, fell outside the scope of this mini-article, as there’s no mention of it.]

“Two Gyro stories had been completed before it was realized that NO characters from the lead story could be used. In the story that begins on your right [an untitled tale where Gyro traps a lightning bolt in a lead box], Donald’s nephews had to be changed to Mickey’s nephews. The next story [ another untitled tale where Gyro invents a super fuel for an impatient motorist ], required that Donald [ serving as the motorist ] be changed to Speedy, a dog-faced little man dressed in a black leather jacket that still resembles a sailor suit.”

JOE’S NOTE: If there are any doubts about Donald having been morphed into “Speedy”, check out “Speedy’s” phone conversation with Gyro:

“But, I’ve got to have that gasoline by NOON, Gyro! Gladstone is coming over with a new sports car, and I can’t let him outrun my old hot rod!”

Hmmm… Maybe Gladstone Gander annoys many more folks than we know… including a “non-cousin” going by the name of “Speedy”, eh? Or, perhaps there should have been some re-dialoguing, to go with that re-drawing?

Huh. So those features in my '70s DENNIS THE MENACE reprint digests-"Screamy Mimi", "Punky", and "Chub", among others-that used to flummox me as a young 'un ( "Who are these characters? Why are these here?" ), were not "back-up stories" or "filler material" as I have previously deemed them, but a stipulation of the money hemorrhaging government behemoth known as the USPS? Well, cue up the "The More You Know" theme music- you've once again contributed to my funny book education, and I thank you.

Also, coincidentally enough, TCM is airing "I Am Curious (Yellow)" on Oct. 15th. Fingers crossed that Osborne or Mankiewicz mentions your title pun during their intro.

I didn’t read those DENNIS comics, TCJ, but I’d bet the farm that’s exactly what they were! Most likely fulfilling that function for the ‘60s or ‘50s comics in which they originated.

In the event my Yellow Beak pun fails to make the TCM intro, at least you got to experience it here! …A “behind-the-scenes-comic-book-process-peek”, if ever there was one.