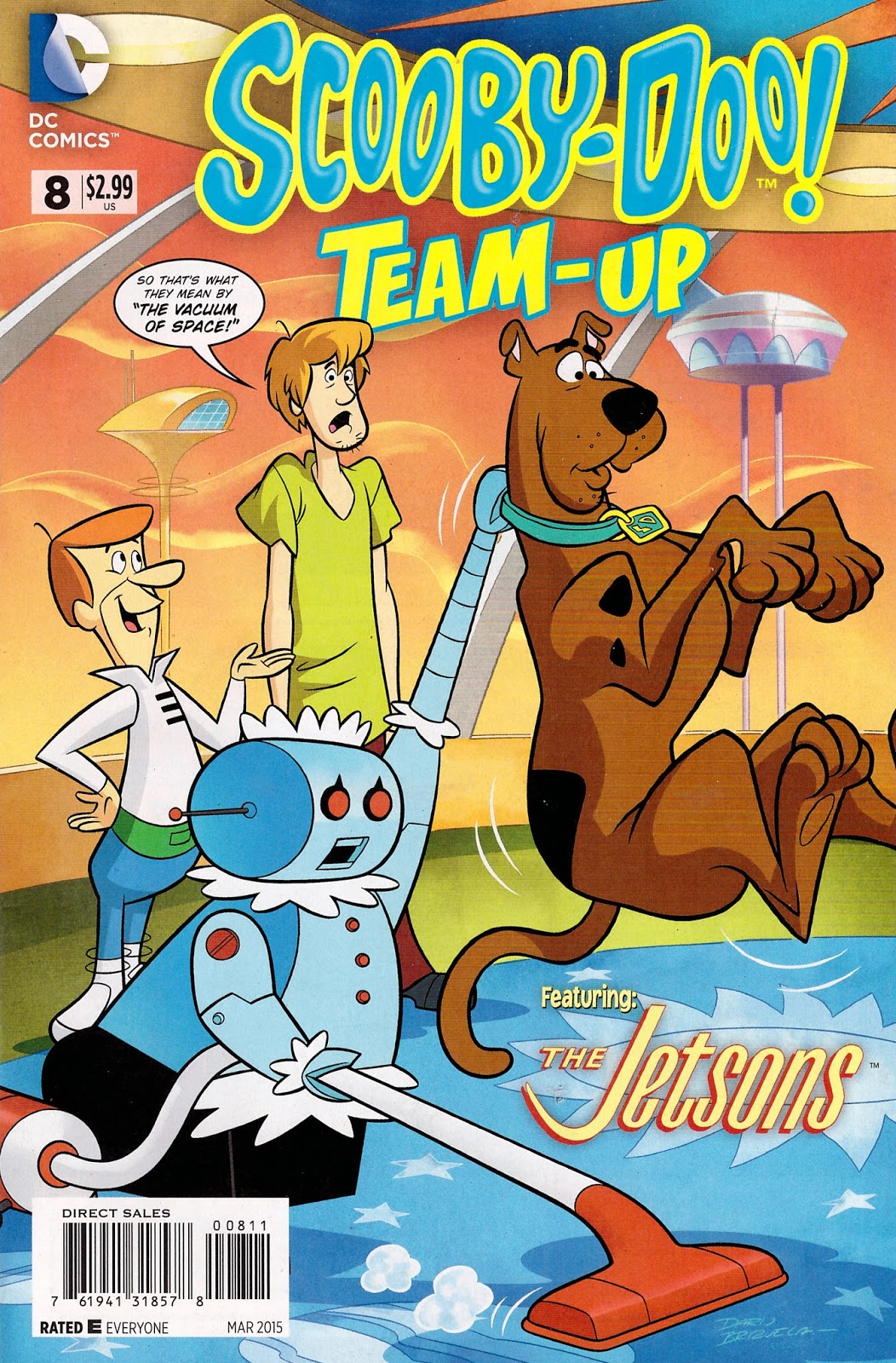 As we used to say in the old APA and Fanzine days:


SUMMARY:  "Future-Doo Where Are You?"

Per my own current sensibilities, one of the best comic books on the market today is SCOOBY-DOO TEAM-UP, written by the brilliant Sholly Fisch and drawn by various artists -- though, in this case (as well as the previous issue) -- by the great modern Hanna-Barbera character artist Scott Jeralds.  Though I expect THIS COMING SERIES OF COMICS will give it a little competition. 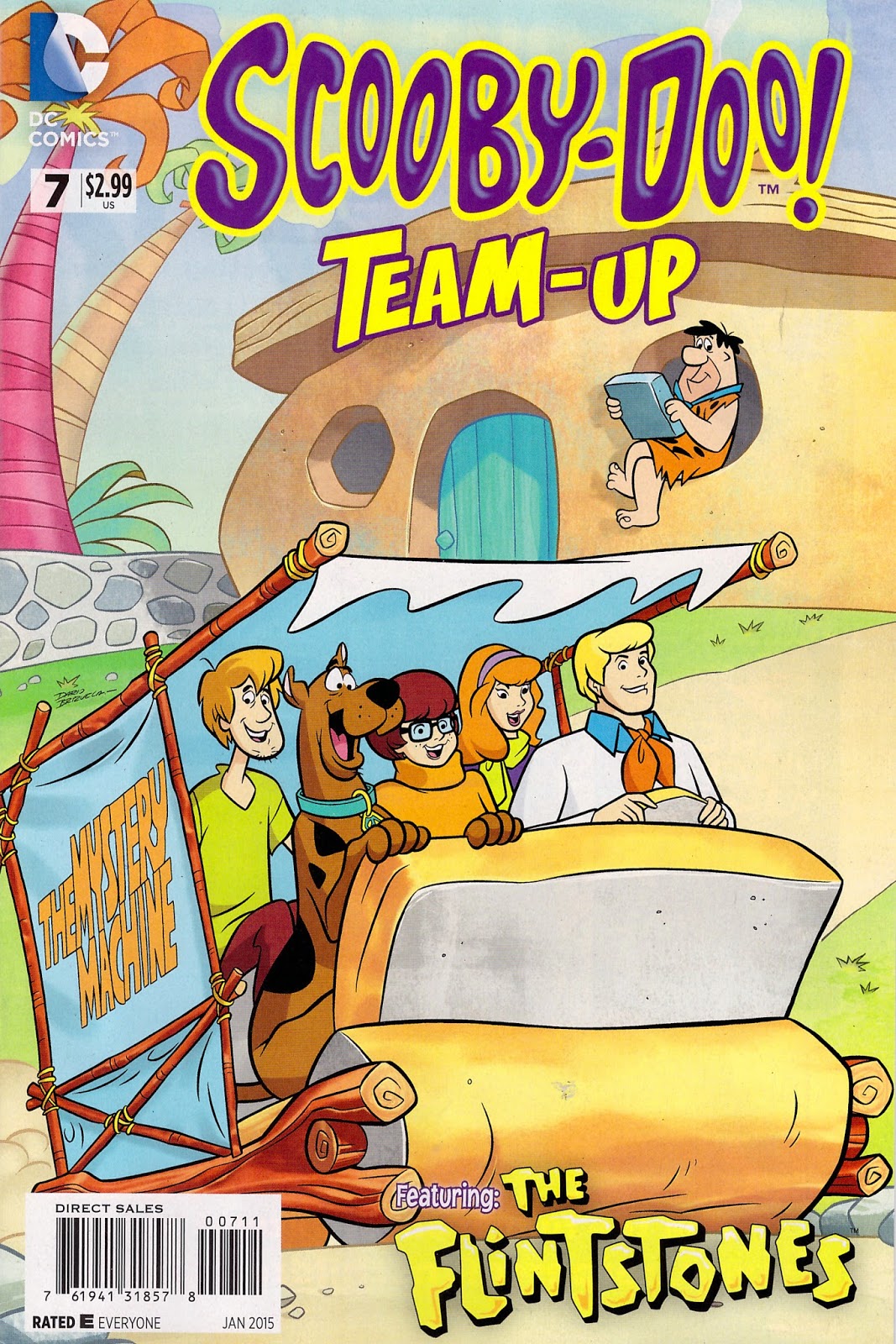 SCOOBY-DOO TEAM-UP # 7 takes our Mystery Inc. Gang from their present (let's not reopen the can of worms put forth by the final episode of the amazing TV series SCOOBY-DOO MYSTERY INCORPORATED and wonder if "their present" is either 1969-1970, or the early 21st Century), to the Stone Age of The Flintstones... and all the way to the future of The Jetsons! 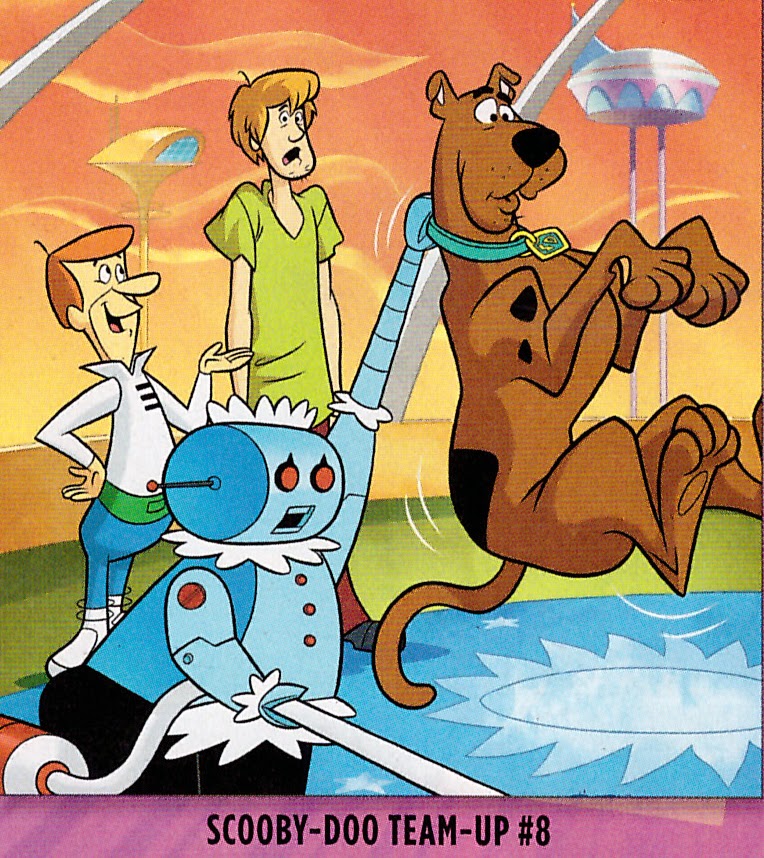 To quickly digress, before we crack the covers of SCOOBY-DOO TEAM-UP # 8, you can find a discussion of the particular merits and demerits of the cover itself HERE. 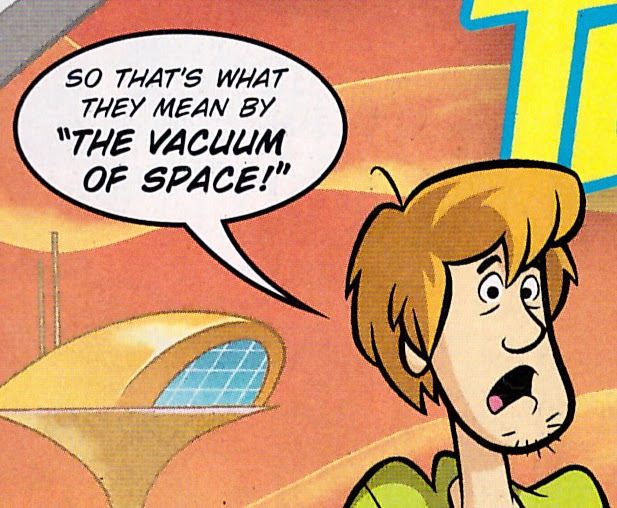 Once in the future, the two sets of classic Hanna-Barbera characters meet and become acquainted.

This brings about my only true disappointment with the issue... the highly anticipated meeting between Scooby-Doo and Astro.   Below are my fannish observations from a previous post:

"As far back as 1970, I said that Scooby-Doo, Muttley, and Astro should be able to hold a conversation, given their 'Don Messick-onian linguistic roots'.

"If it’s the latter, Scooby might find Astro a bit too primitive or pedestrian for his tastes."

Well, gosh... after all that personal anticipation and build-up, all we got was this. 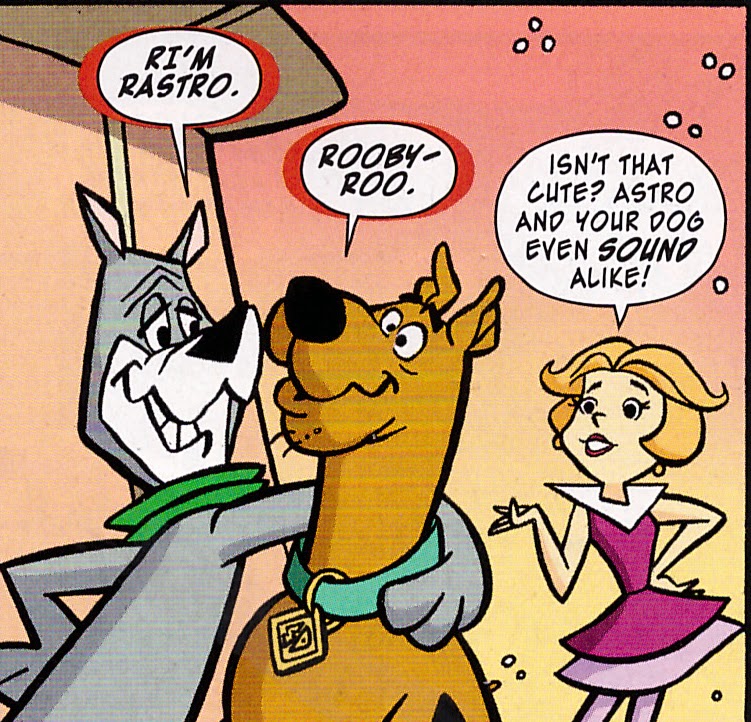 I guess it's my own fault for anticipating so sublime a moment, (...and, perhaps for even USING the word "sublime" in such a context), but at least we got an unexpectedly good moment in the previous issue when Scooby met Dino. 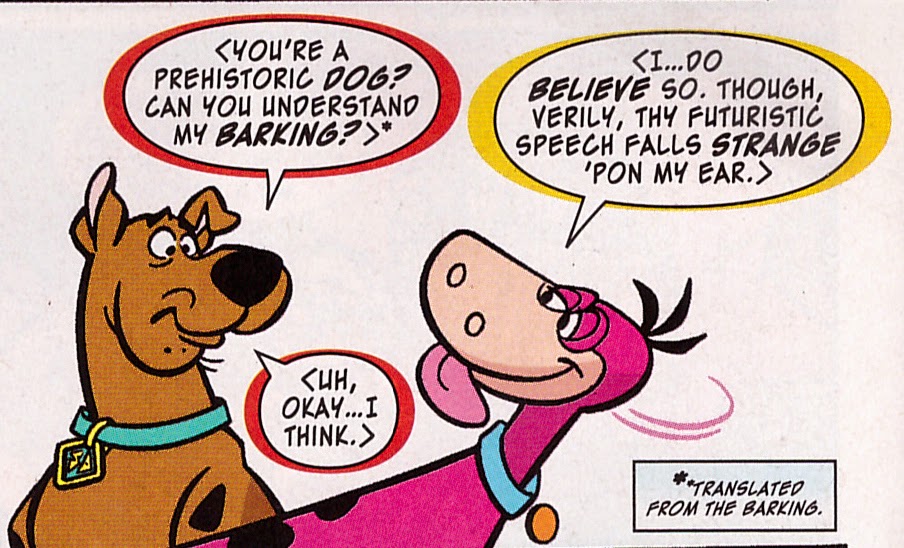 But, now that we've gotten past the minor cover quibble, and the "Scooby meets Astro" moment, there's nothing but great stuff ahead, folks... so let's go!  ...And remember to click on all comic images to ENLARGE for ease of reading.

I dunno about you, but I'd have always figured there would always be Time Machines galore in the future!  Heck, we've had stories about 'em from the Victorian Age to the present day.

But, in a truly great bit, imagine Fred's surprise to find that there are NO Time Machines in the future of The Jetsons, to send the Scooby Gang back to their own era! 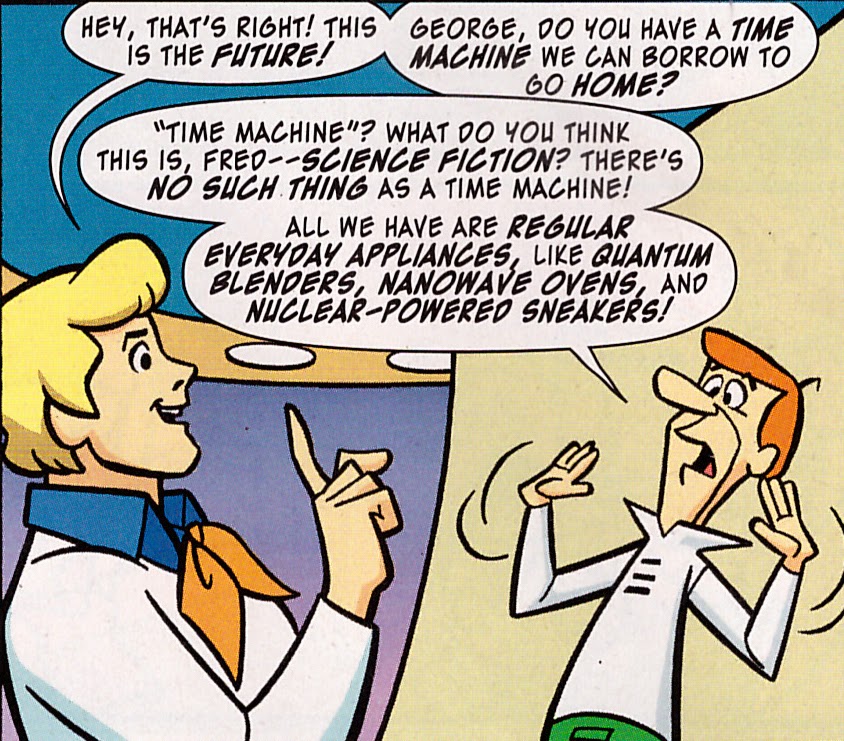 Come to think of it, I cannot recall any reference to a time machine in the original JETSONS series.  (I try not to think much about the '80s series.)

There was at least one Time Machine reference, in Gold Key Comics' THE JETSONS # 19 (Cover Date: January, 1966), but I guess we'll not accept that as canon. 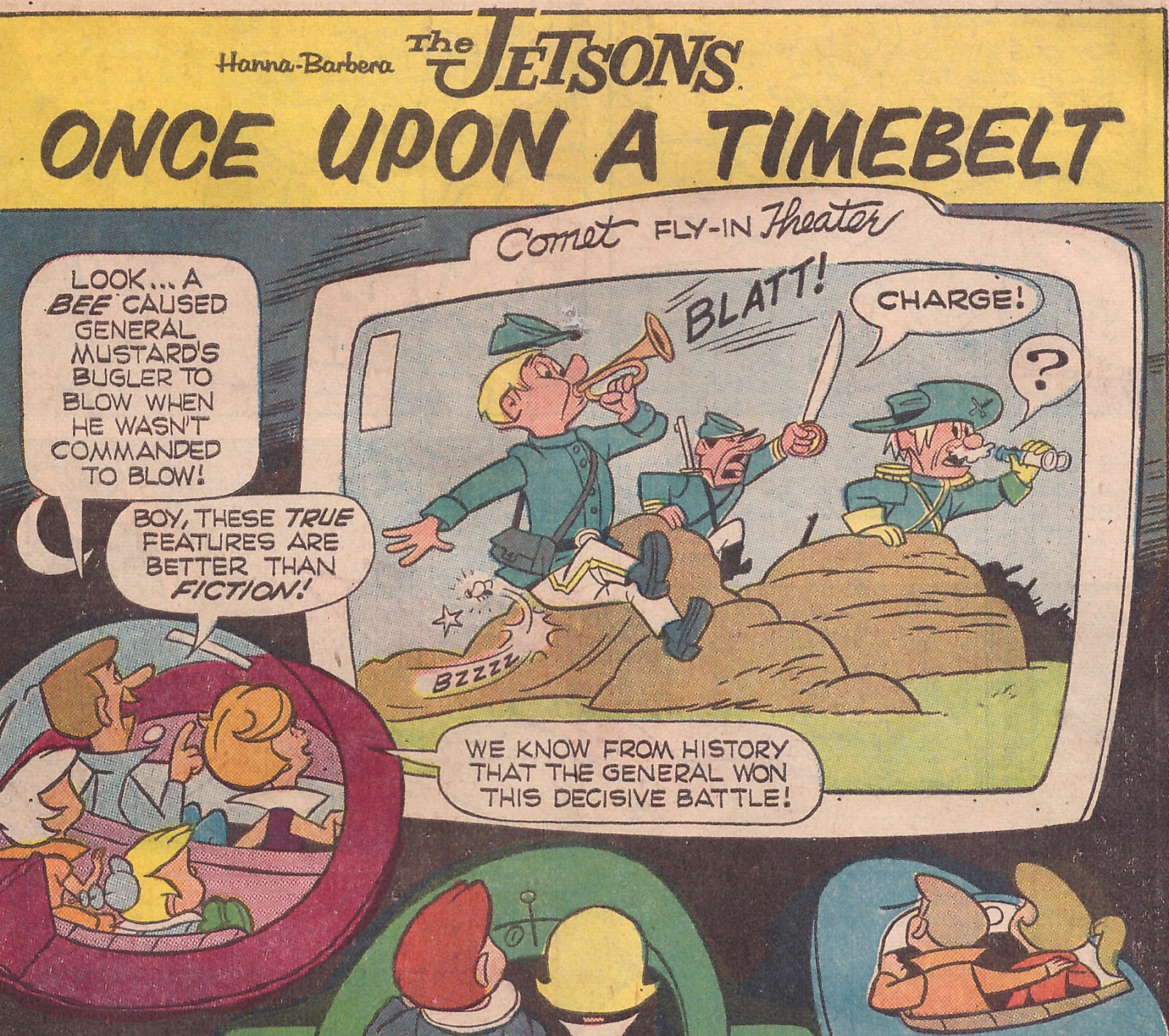 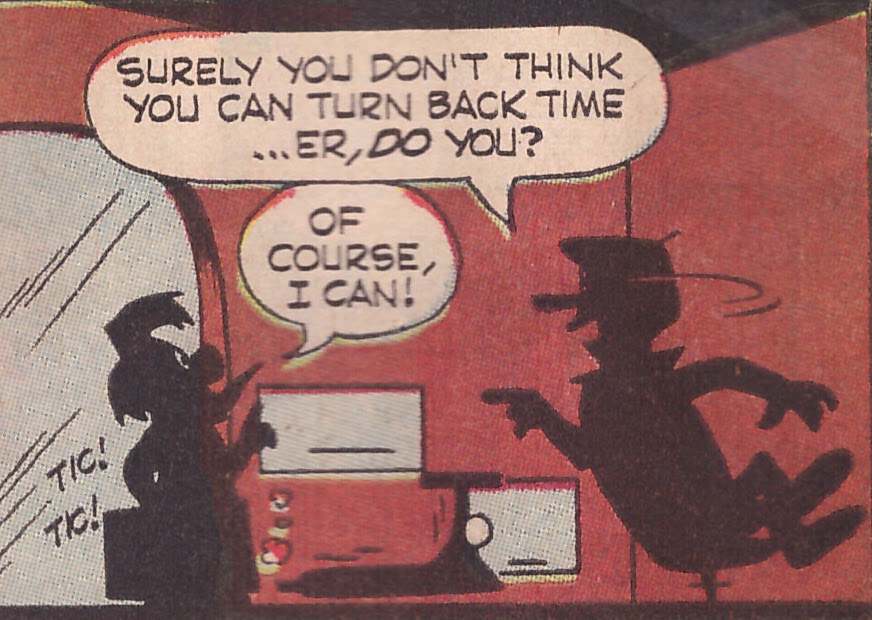 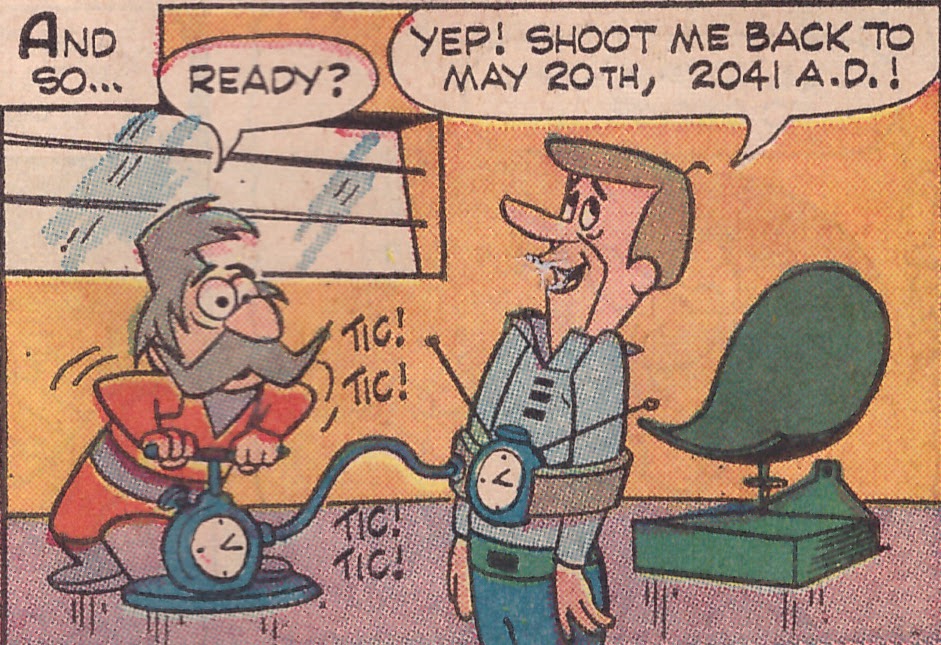 George also took a time trip to Bedrock, in Marvel Comics’ THE FLINTSTONES # 4 (Cover Date:  April, 1978), but we’ll let that one go too. 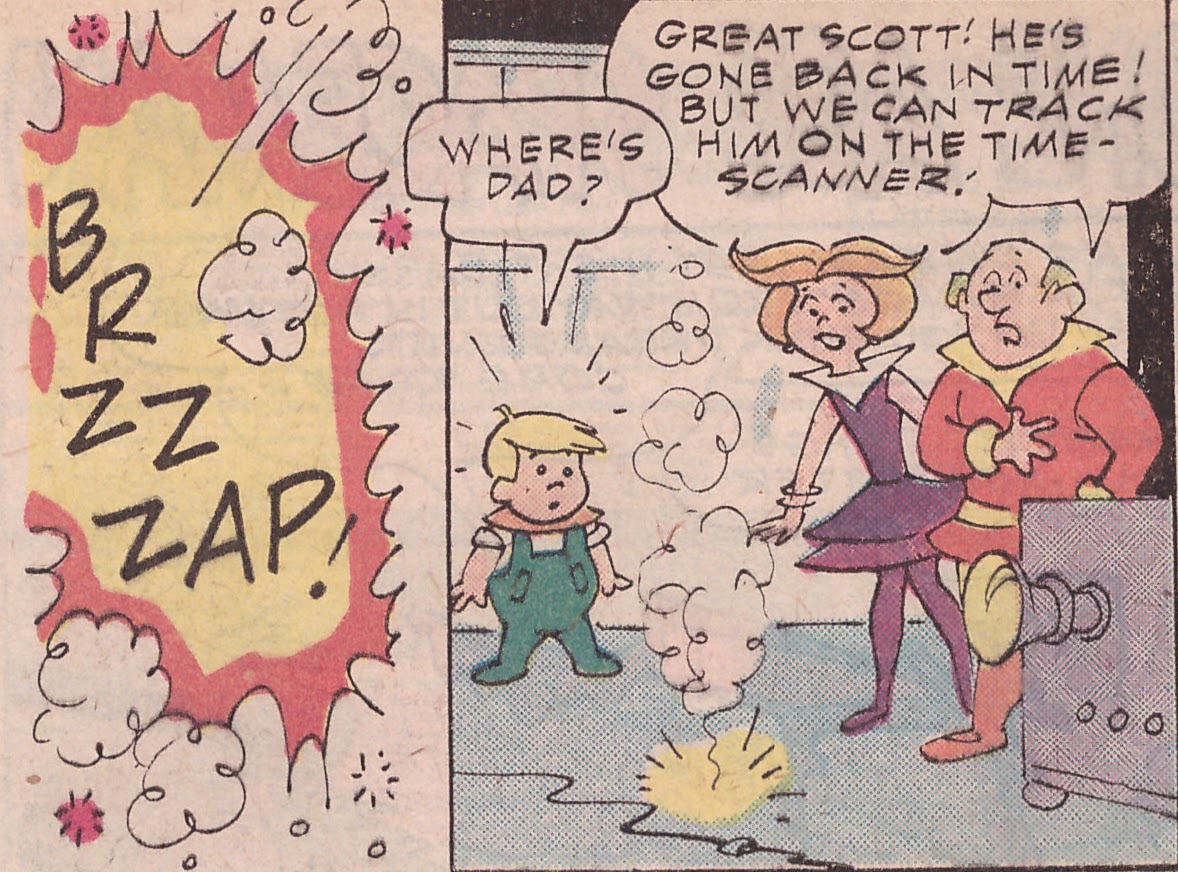 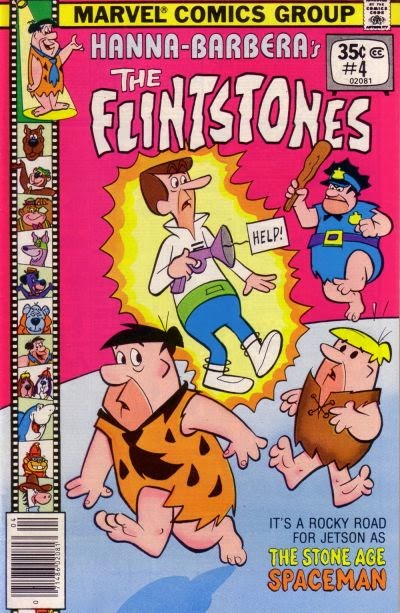 ...Should I even try to remember how that "Jetsons Meet the Flintstones" '80s thing went? 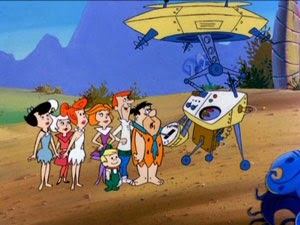 Other great (Have I used that word enough, yet?) bits found in SCOOBY-DOO TEAM-UP # 8 include the following:

Shaggy makes a sandwich. Though, wasn't the household appliance in question called the "foodarackacycle", and not an "Instant Sandwich Maker"? 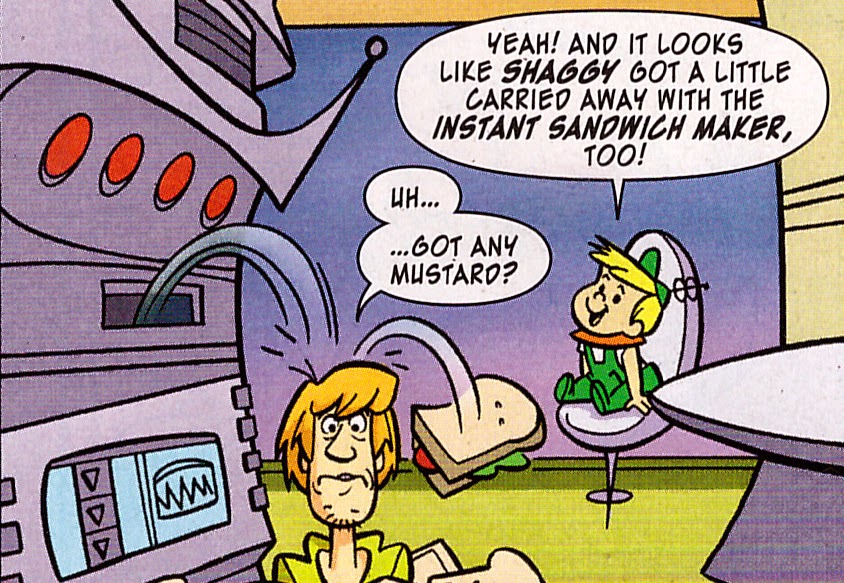 Anyone who's ever seen the opening credits sequence to THE JETSONS (...and who hasn't?), where George's Space Car conveniently folds up into a briefcase, must have wondered what would happen if...  It took until SCOOBY-DOO TEAM-UP # 8 to finally witness it. 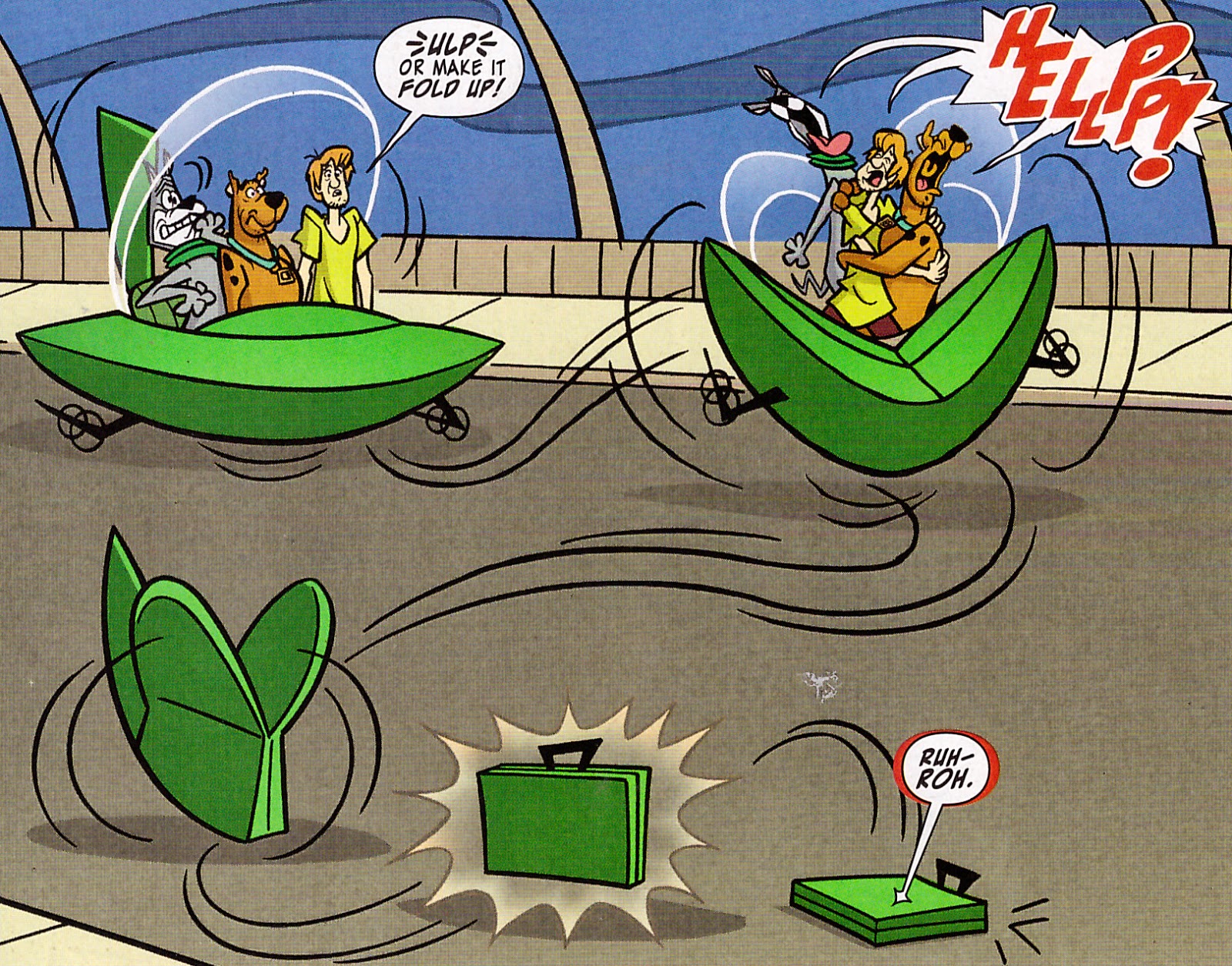 It seems that wherever the Mystery Inc. gang goes, ghosts and trouble follow.  Also, crooked businessmen who often masquerade as the troublesome ghosts.

Therefore, it adds that, when investigating the sudden appearance of "The Space-Age Specter", come to haunt the Spacely Sprockets firm, Mr. Spacely's chief rival, Mr. Cogswell, is immediately considered to be a suspect.

...But, since the is the first time the Jetson characters have been a part of this staggeringly overused plot device, there is some natural skepticism -- until Fred offers a keen observation... 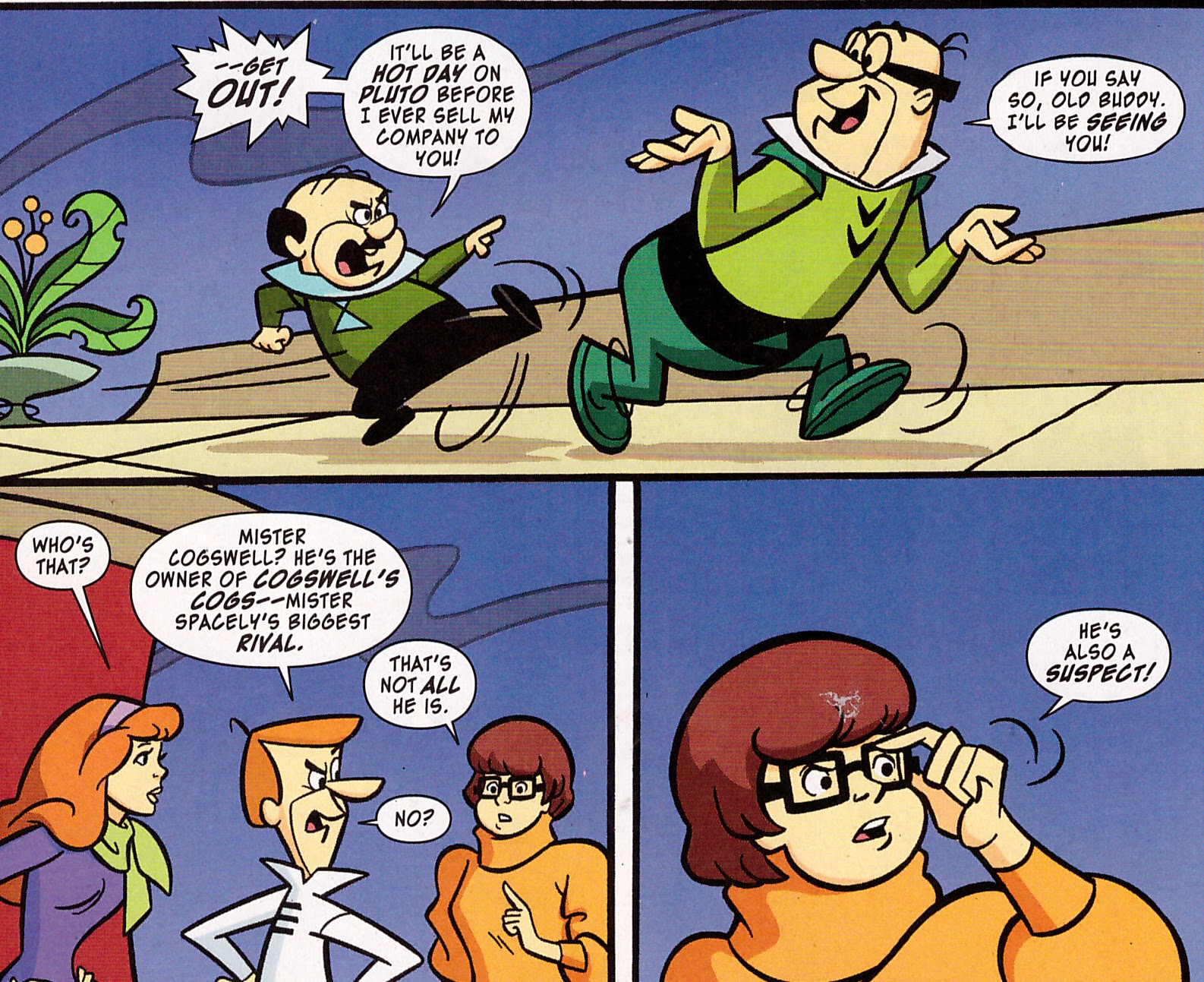 How do you not LOVE that!

Of course, our heroes take up the case... 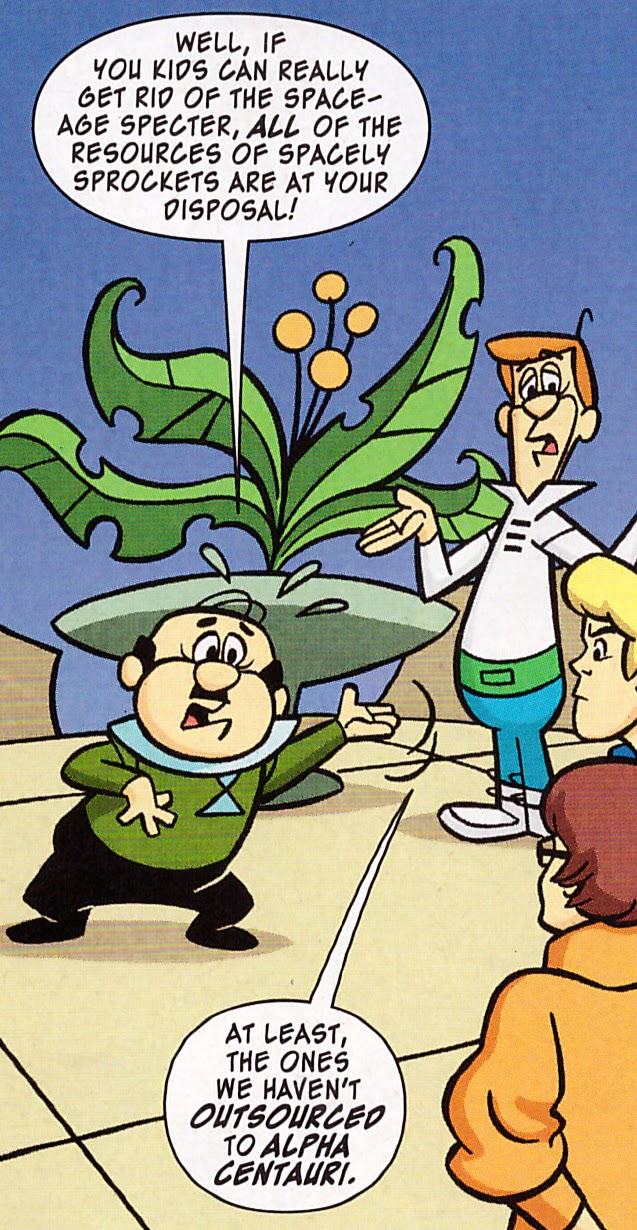 ...And, because we avoid spoilers in these reviews, we will stop our story recap here.

But, I will say that any guess as to the identity of "The Space-Age Specter", made by myself or any of my intrepid commenters in previous posts, did not come to pass!  I really like it when a comic such as this can still "out-think" longtime, and perhaps jaded, readers. 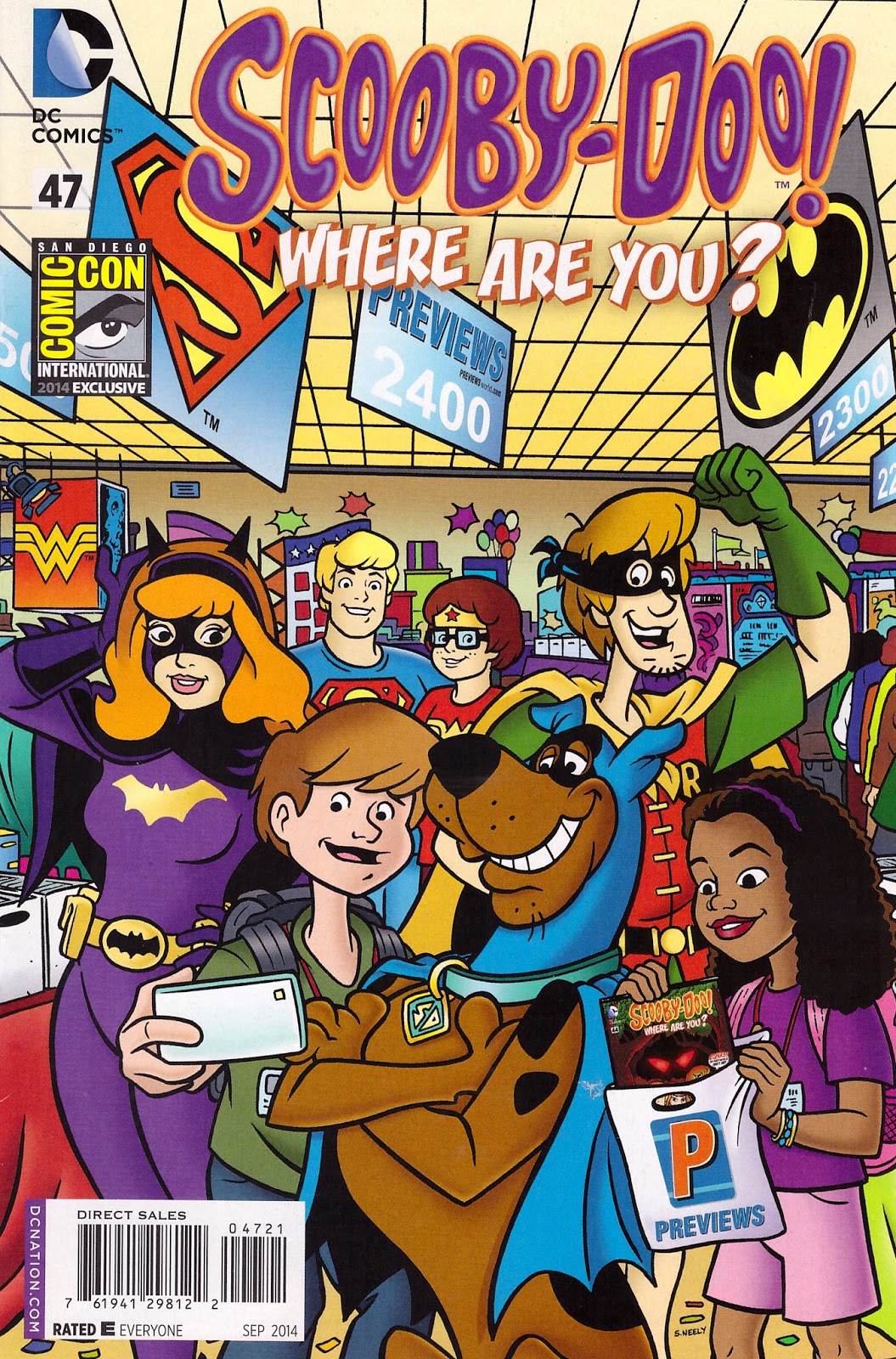 And, the resolution was kinda-sorta like that of Scholly Fisch's lead story in 2014's SCOOBY-DOO WHERE ARE YOU # 47 - but that's all the spoilers you're gonna get here. 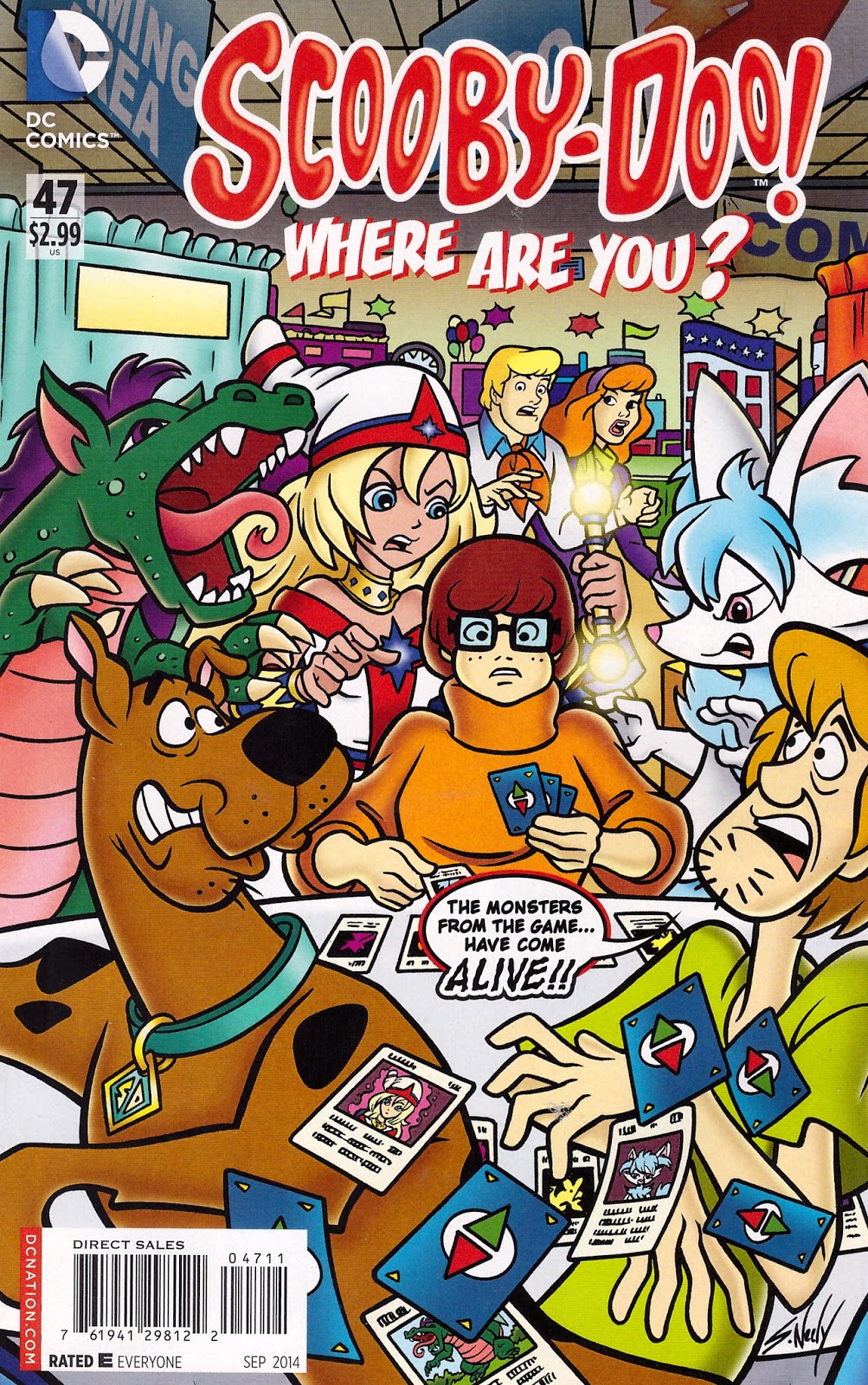 Scooby and friends eventually do get home in a marvelous ending plot-twist, which I will not spoil, and even George has a happy (if temporarily so) ending! 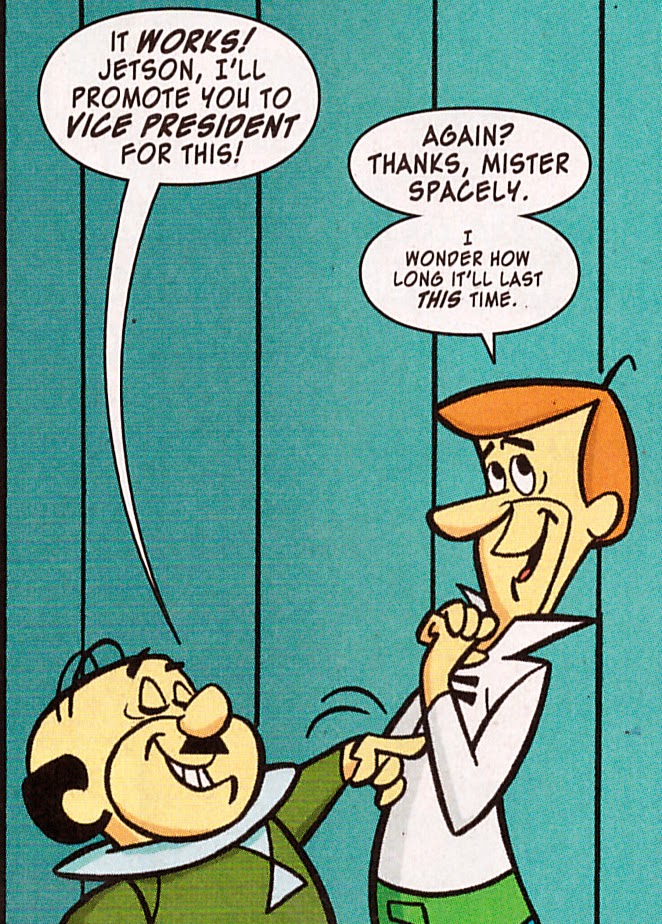 Excellent job, as is his usual, for writer Scholly Fisch -- and let's take one more moment to enjoy the fantastic art of Scott Jeralds.  Just look at how he captures the ATTITUDES of all four characters in this drawing below - and of George and Mr. Spacely in the one above! 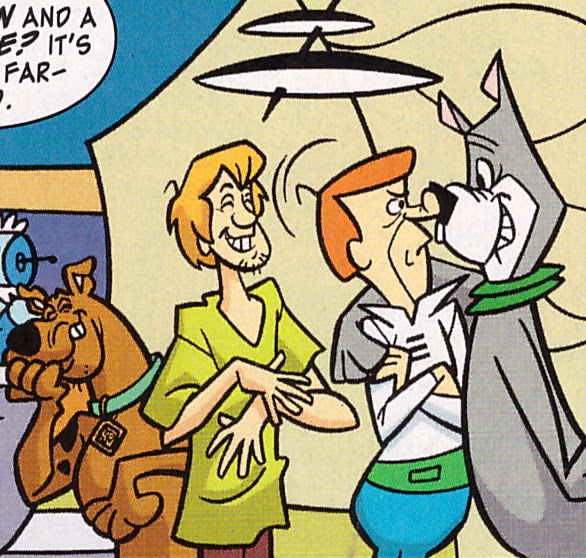 Capturing "character attitude", as opposed to just good figure work, is not as easy as it may seem!  Excellent job, as well, to Scott Jeralds!

This team is SO RIGHT for this sort of material, we can only hope there are more such opportunities for them to do so in the future. 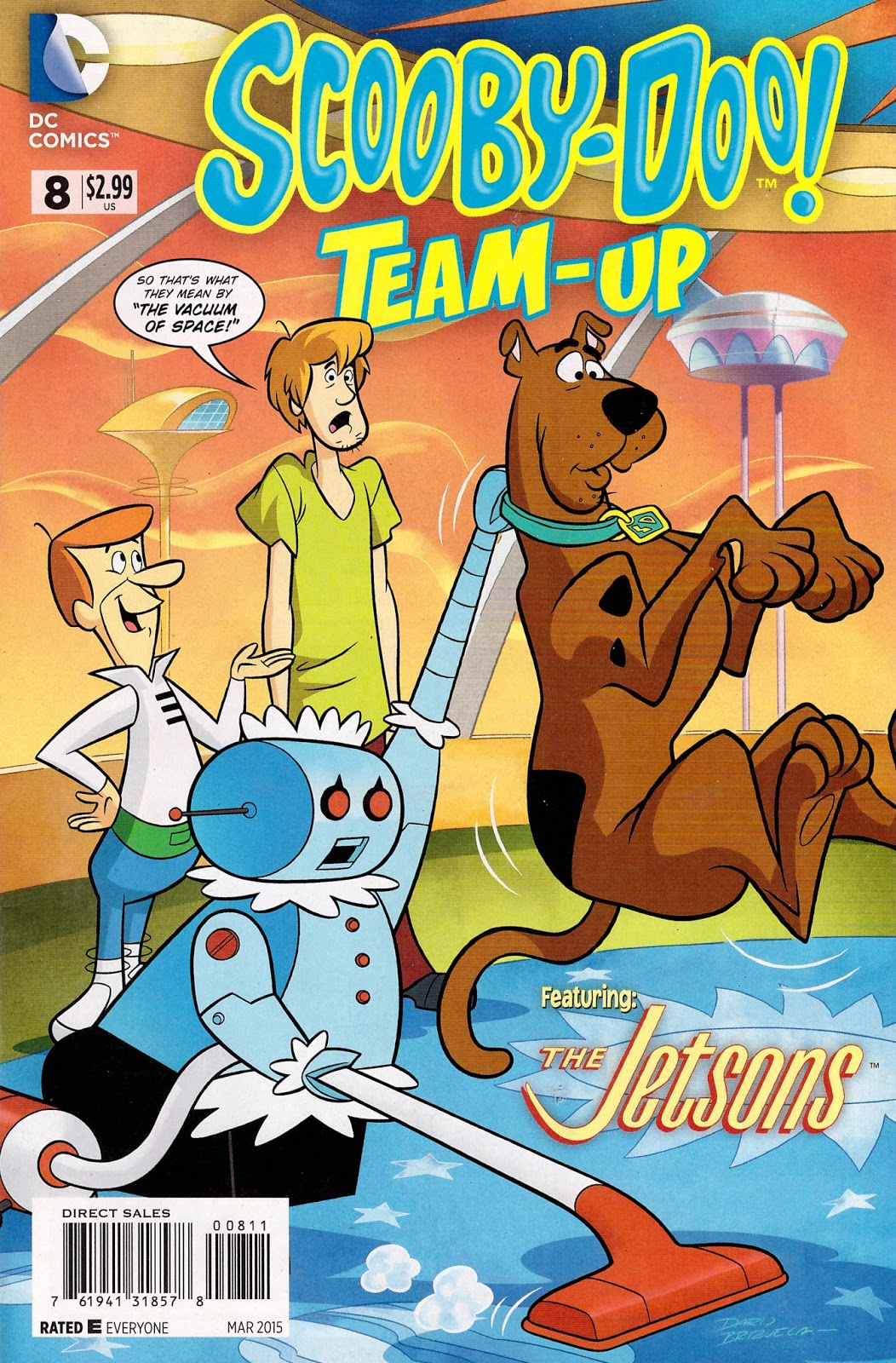 SCOOBY-DOO TEAM-UP # 8, as well as the ENTIRE RUN of the series, is highly recommended to anyone who is inclined to visit this blog -- and, heck, to EVERYONE in general!

A perfect review for another well-done issue of Scooby-Doo Team-Up! The Jetsons have rarely been so well-depicted in comic book form... the last time I recall was a series of Denny's kid's menus with new 2-page comic spreads by Scott Shaw! in the early 1990s.

The only eyebrow-raising moment I had was a replacement you had mentioned: I figured the "Food-a-Rac-a-Cycle" was a pretty well known appliance within the Space-Age world? But that's a very minor nit, for Scholly Fisch and Scott Jeralds captured the attitude of the original series perfectly. Mr. Jeralds truly captures the energy and appeal of Iwao Takamoto's designs. With luck, they'll have more opportunities for stories featuring our favorite Stone-Age and Space-Age families.

I duly agree that anything beyond the original 1962 Jetsons episodes isn't quite canon, so we can always use the comic book "whitewashing" of continuity an Earth-2 or multiverse scenario!

Hmm, an H-B multiverse? Ricochet Rabbit on a cosmic treadmill? Crisis on Multiple Magillas? Man, I bet Bill and Joe would love that: they'd sell twice as many shows!

…And, twice as much MERCHANDISE, Dan! Maybe lots MORE than twice!

Oh, no… wait! That actually DID happen! …Never mind!

And, because I so admire the job Scholly Fisch has done on this title, maybe we can explain away the "Food-a-Rac-a-Cycle" vs. “Instant Sandwich Maker” thing as the latter being a separate and more specifically-purposed appliance – or maybe a successor of sorts, as the “icebox” gave way to the “refrigerator”.

As an artist of considerable talent yourself, I’d regard your comments on Scott Jeralds as high praise indeed.

And, what the heck, as long as I’m going “all-fanboy” on you, I’ll go as far as to regard most stuff in the Dell and Gold Key comics as “canon” (…even if that “rhyming Road Runner family” must be placed in one of your aptly-named “Multiple Magilla” universes) and say that the “time machine” from the Gold Key story simply never caught on and faded into a state of impossible to find nonexistence… not unlike the Betamax.

You know, like if a time-lost traveler from the late seventies suddenly popped into my living room today, desperately needing to play a Betamax tape in order to find his way home, I’d be as unable to help him as George was to Fred.

…Anyone who likes the Marvel H-B comics, or the ‘80s made-for video special, as much as I like Gold Key Comics, can regard their versions in similar fashion! Unlike today’s politics, we’re all about compromise and inclusion at TIAH Blog!

One other issue that really needs to be addressed regarding these latter two issues of "Scooby Team-Up"--instead of the Flintstones or Jetsons characters "guest-starring" in a couple of Scooby Doo adventures, what we have here is the Scooby gang guest-starring in Flintstones and Jetsons adventures--with a couple of spooks thrown in to make them feel at home.

In other words, Scooby and company don't just "move in and take over" and assume the full lead in these stories with the other characters as background. There's actually a lot of give-and-take here, with both the Stone Age and Space Age families getting plenty of play. I can so easily picture how these great ideas could have been "ruined" by the wrong kind of approach--and it's VERY prevalent whenever one group crosses over with another group! Many's the Justice League team-up with the Justice Society, where the Leaguers took center stage and the JSA served as background props. (Or the other way around--or certain characters got to shine, but others had little to do.)

Finding the right balance in crossovers like this is very tricky--either one group gets favored over the others, or certain characters don't get enough to do to justify their presence in the story. What we have here is a bona fide Flintstones adventure, a bona fide Jetsons adventure, and two bona fide Scooby adventures! A truly praiseworthy feat, gentlemen!

That’s an excellent point about “balance”, Scarecrow… and key to the overall success of the SCOOBY-DOO TEAM-UP title. Even when the guest is Bat-Mite -- who certainly CAN take over a story, if you’d let him!

Yes, we’ve actually gotten our first Flintstones and Jetsons comics in too many years -- and two great Scooby-Doo comics as well!

Ha! Got this issue this very Wednesday (my local comic shop had to re-order it for me), just in time to read it in concert with your review!

I thought that Scott Jeralds did a nice job of prefiguring the reveal of the specter's origin, in the way he drew the body language of the character in question early on. That's as much as I can say without a spoiler! But it's another indication of the quality of the art.

Looking back on the issue, now that you mention it, I have to agree. Well done, by Scott Jeralds – and sharp-eyed, spoiler-avoiding you.

Very cool the dialogue between Fred Jones and George Jetson!

When I saw George mentioning Alpha Centauri in the crossover involving Scooby-Doo and the Jetsons, makes me reminding of Lost in Space (Irwin Allen Productions/20th Century Fox, 1965-68).