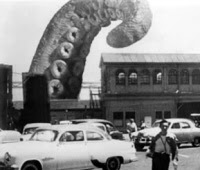 Separated at birth (…or at least at the colorist’s), these three comic book covers all appeared over a short span of time – making for ONE BUSY OCTOPUS!

ROBIN # 84.
I guess he worked cheap – though I understand he demanded to be paid in PIECES OF EIGHT!


Oh, and for those still groovin’ on THIS POST, here’s an early Gold Key “Octopus Cover”.


And, finally, before leaving this “Octopus’ Garden”…

“The Octopus Granddaddy of Them All” – Carl Barks’ “Octo-Pepper-Pus” from his 1947 masterpiece “Ghost of the Grotto”!

Japanese tentacle art fetishists ... the whole lot of them!

OMG! I never thought of my Blog as being fetishist!

Would Woody’s five-tentacled friend fall under some specialized fetish? …And can I even use the word “Woody” in such a sentence and maintain my usual decency guidelines? …Oh, the unexpected places we sometimes go!