Last Post, I defined the comic book “Weird Christmas Tale” and why it is given a special place in our hearts, minds, and in this Blog. Now it time to “Crack those Covers” and present my 2001 APA column The Issue at Hand # 57 for some “Weird Christmas Comic Book Fun”…
The Issue at Hand Is: LOONEY TUNES AND MERRIE MELODIES COMICS # 99 January, 1950. Published by Dell Comics. 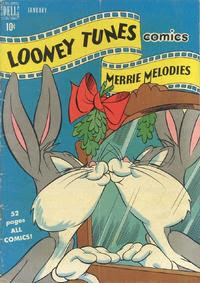 I purchased my copy of this “Weird Christmas Curio” at Comic Con International San Diego: 2001, and picked it, totally at random, from my trove of booty to read during the long return flight home to New York. It was a nice sort of “Christmas-in-July” experience.

However, when I hit the last page of the story, it moved it from an ordinary Christmas story to a “Weird Christmas Tale”!

Perhaps, I should have been warned by the cover. In his cartoons, Bugs Bunny is often seen “kissing” Elmer Fudd, Yosemite Sam, and other adversaries. We chuckle, and little is thought of it as we move on to the next explosion or anvil-dropping gag.

Here, though, Bugs is seen kissing himself – actually a mirror’s image of himself, over which a festive sprig of mistletoe is hung. I shouldn’t be too hard on Bugs for this. After the ending of this story, you might agree that Bugs would be well-advised to simply “keep it to himself”!

During the last week of 1949, there is “Only ONE more shopping day ‘till Christmas”.

Bugs Bunny has never lacked for female companionship – “Daisy Lou” from the 1948 cartoon “Hare Splitter”, “Honey Bunny” from the comic books of the 1960s and ‘70s, and “Lola Bunny” from the recent feature film “Space Jam” to name a few – and this year is no exception. Miss 1949 is “Lula Belle”, a tight-sweatered, plaid skirted, blonde bobby-soxer of a bunny with an almost-human flesh-colored face and legs… and gray “rabbit ears” protruding from her blonde hair. Bugs, apparently, liked ‘em exotic – exotic for a rabbit, that is. Lula Belle’s design was an unusual image for the time, to say the least.

Being a “typical guy”, Bugs has just purchased Lula Belle’s Christmas present – a single carrot – rationalizing: “…About girls, it ain’t so much the present, it’s the sediment [sic]”. He then spots Lula Belle at a jewelry store, buying an expensive watch. She requests that it be engraved: “To my favorite boy friend”.

Okay, “normal” Christmas story so far. We have the potential for a classic “comic misunderstanding”, upon which so many sit-coms are based. After eating the carrot (…as I said, “typical guy”), Bugs desperately searches for money to buy Lula Belle a more suitable gift. He quickly volunteers for an amateur scientist’s “Atomic Propelled Rocket Mission to the Moon”. Nope, still not a “Weird Christmas Tale”. Convenient, oddball money-making opportunities like this can turn up on virtually any street corner in certain cartoon or comics continuities.

The rocket arcs into the stratosphere and immediately plummets back to the North Pole (…it WAS amateur, after all ), leaving Bugs to believe he’s landed on the Moon. He mistakes a penguin for a “Moon creature” and a strolling Santa Claus for “The Man in the Moon”. Not yet a “Weird Christmas Tale”, as two issues later, Bugs would meet the real Man in the Moon – and find him to be some bizarre clone of Yosemite Sam! Compared to THAT story, this one – at least SO FAR – is downright tame!

While trying to recall if Bugs was on his list of “GOOD boys and girls” or “BAD boys and girls”, Santa gets word via snowbird that Mrs. Claus’s plane, loaded with Christmas toys, was forced down nearby with motor trouble. Santa prevails upon Bugs to don a spare red suit and beard, and keep the toys (…who apparently “…come to life, only here in Santa Claus Land”) out of mischief, while he tends to the grounded plane. Even THIS notion does not categorize the story as a “Weird Christmas Tale”, as there were a number of old Warner Bros. cartoons where toys, groceries, characters from books and magazines, etc. would “come alive”, once their respective stores or shops closed for the night.

The toys quickly wise to the deception (…though I can’t decide if it was Bugs’ slight build, buck teeth, fuzzy cotton tail, or long ears which tipped them off ) and the rabbit is attacked by toy soldiers, sailors, marines, police and fire departments as an impostor. Once explanations are exchanged, the toys ask Bugs to assume some of Santa’s duties until he returns. These include: sewing up a stuffing-leaky seam on a Teddy Bear, teaching “Mama Dolls” to stop saying “Papa!”, and helping the Toy Police Squad locate “The Big Bad Fox” who escaped from his own story book and is hiding inside a copy of “Pollyanna”.

When Santa fails to return by the Christmas Eve departure deadline, the toys press Bugs into service to man the sleigh and take off into the wild blue Yuletide yonder. STILL not a “Weird Christmas Tale”, readers! In comics and animation, characters as diverse as Mickey Mouse, Fred Flintstone, and Cartoon Network’s Johnny Bravo have been called upon to substitute for Santa Claus – with the expected varying results. It’s only fitting that Bugs Bunny, arguably animation’s premiere superstar, get to try his “four-finger gloved hand” at this!

BUT NOW… NOW, we get to the part that makes this our first “Weird Christmas Tale”! Wooooo!

Once underway, Bugs decides to make his first stop at Lula Belle’s house. He shimmies down the chimney in time to observe Lula Belle and her father swapping gifts – and hears the following exchange:

“And look at the engraving on it, Father!”

“ ‘To my favorite boy friend!’ How sweet, Lula Belle!”

“You are my favorite, you know, Father!”

WHOA! I’m not sure I REALLY WANT TO KNOW what’s going on inside THAT “happy home”! Welcome to “Weird Christmas Tale Land”, folks!

Even IF this WERE intended as a completely innocent plot contrivance on the part of the writer, there were OTHER, more appropriate, ways in which this could have been handled!

Just modifying the watch’s inscription to something more general like “To the man I most admire” would have accomplished the same result, and not take this story to a place I’m certain none of us wanted to go! One can only hope that this passed innocently the over the intended audience’s collective heads, as it apparently did with the Dell editorial staff!

If I were Bugs in this situation, I would run like the dickens, because there are some problems you just can’t solve with dynamite sticks and anvils! And so he does, with a frustrated: “Well, how do ya like that!”. Small wonder, he basically “abstained” until “Honey Bunny” arrived on the comics scene in 1966. Smart bunny, that Bugs!

At this point, Santa arrives to relieve the romance-rocked rabbit, who banishes his woes with a good Christmas-time heckling of old pal, Elmer Fudd.

The balance of Looney Tunes and Merrie Melodies Comics # 99 proceeded along uneventfully with more standard seasonal stories featuring Sniffles and Mary Jane, Porky Pig, and Henery Hawk. Oddly, it concludes with a summertime story, in which Sylvester ineptly caddies for golfer Elmer Fudd. Huh? Can you say “Inventory”, readers?

August, 2012 UPDATE:  For another story with Lula Belle and her Dad, go HERE!

December, 2012 UPDATE:  If you wish to actually SEE the story, go HERE!


Next Time: “Weird Christmas Tales” Chapter Two with The Flintstones.
Posted by Joe Torcivia at 3:01 PM

Could you post scans of the Christmas story with Lula Belle? It's quite interesting :)

I am very sorry to say that I do not presently own a scanner.

I know that puts me at something of a disadvantage, especially when writing about comic books, their creators, etc. You may notice that any images I publish on comic books are taken from various places on the Internet. That’s why I always have cover scans instead of interior pages – they’re easy to locate.

Glad that you enjoyed the post anyway – especially that it’s just over 3 years old!

Thanks for you reply :)

Some time ago I came across Honey Bunny and immediately became Honey-maniac. Later I decided to find and download as many scans of comics as possible, and while reading them, I counted over 15 girlfriends of Bugs Bunny taht appeared in comics, animated shorts, etc... two wives, Lula Belle, Honey Bunny, Bertha Bunny, Millicent, Bonnie Bunny, Lola Bunny, Daisy Lou, who probably made a cameo appearance in Looney Tunes magazine few years ago... to name some of them...

And this issue is one of those that are really hard to find anywhere. No scans, no pieces available in shops, just covers... :(