Life is full of pleasant surprises! And this was a great big one for me… 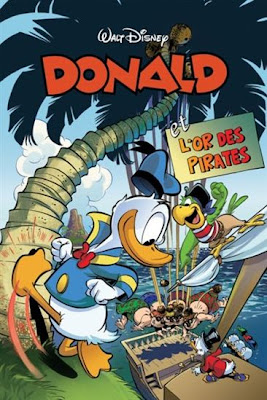 Both “Pirate Gold” stories feature the parrot “Old Yellow Beak”, or “Le Vieux Bec Janue”. Please forgive any errors I may inadvertently commit in my attempts to present the French language in this post.

Now, pairing the original “Pirate Gold” saga with its early sixties sequel from Italy would be special enough -- and something we didn’t get to have here in the states – but this particular packaging goes an amazing step further by taking MY ENGLISH LANGUAGE SCRIPT for “Donald Duck Finds Pirate Gold Again”, as seen in Boom!’s DONALD DUCK # 366 (2011), and translating THAT into French! 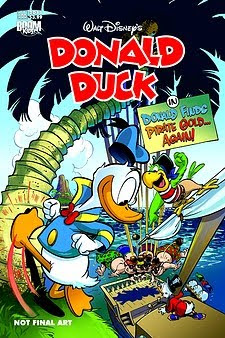 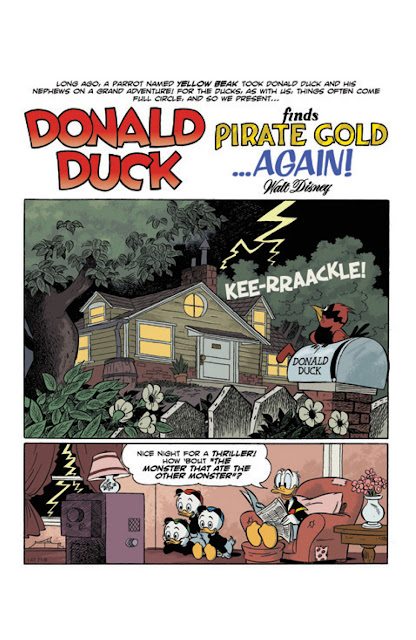 So, at the bottom of the illustration above, Donald says: “Nice night for a thriller! How ‘bout ‘The Monster that Ate the Other Monster’?”

Or, at the bottom of this one: 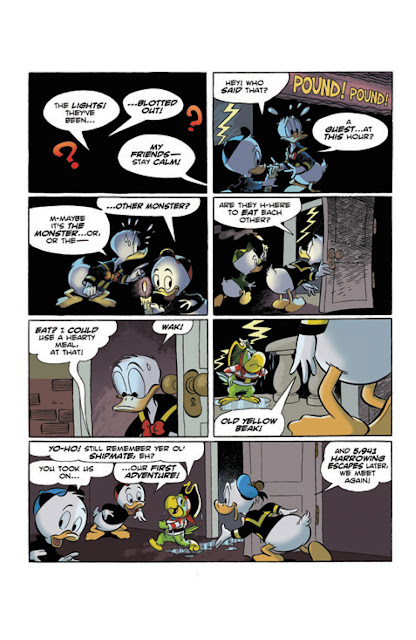 
These are bits that were EXCLUSIVELY MINE, not part of any previous translation, and here they are translated into French!

And, if there’s any doubt, or possibility of coincidence, I called the treasure island “Boli-Boli-Holi-Moley” – and PRESSES AVENTURE called it “Boli-Bola-Bolo-Hola”. (Likely making their own joke, after mine!) 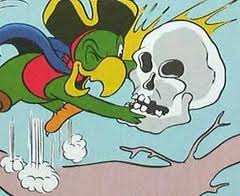 Even some of my trademark PUNS remain intact… to the best extent they can, such as the sign fronting the Beagles International Tahiti headquarters on Page 21:


There are no words to adequately describe the “geeky-thrill” I experienced looking through this, even though I can hardly read a word of it. 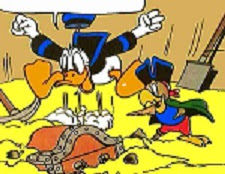 Other scripts of mine that have found their way into French translations are “Moldfinger – or The Spy who Ducked-Out on Me” (Donald Duck Classics: Quack-Up) and “The Last Auction Hero” (UNCLE SCROOGE # 397). 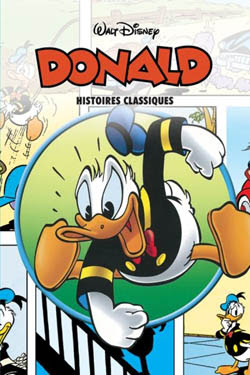 I wish PRESSES AVENTURE great success in this enterprise, while I consider investing in a crash course in French!
Posted by Joe Torcivia at 7:30 AM

This is très cool, Joe. Thanks for telling us about this! I'm gonna have to order myself a copy of the Pirate's Gold volume from Canadian Amazon, if only to get myself a softcover book that includes both the original and the sequel. And how cool for you, to see that they used your English script as the basis for your translation, and brought some of your own jokes to a whole 'nother audience!

It sure was a surprise for me, Elaine!

You’ve got to wonder how translations / localizations become attached to certain stories. The English version of what I called “Donald Duck Finds Pirate Gold Again” was not only bland and uninteresting… but made NO reference to the original story, as if the translator from Italian didn’t even KNOW of what he or she was working with!

Yes, really! To the point where Yellow Beak was just a parrot called “Salty”!

And, perhaps the lamest ending line in Disney comics history: Uncle Scrooge, noting YB’s new ship, refers to the fact that his own cargo ships are called “Dollar 1”, “Dollar 2”, “Dollar 3”, and so on! I’m paraphrasing, because I’ve long since purged that atrocity from my mind! That I was able to replace it with a reference to “Only a Poor Old Man”, only helps me forget it all the more… Thank goodness!

It was as if they just threw any old thing out onto the page. I kid you not! I hope it never appeared this way in any English speaking country!

All ego aside, if my localization of the story in any way supplants the wretched thing I was originally given, and serves as the template for future printings of the story (in ANY language), we should all feel good about that!

In that book, you’ll also find David G.’s version of “Special Correspondent”. I’m assuming, from past comments, that you read French. If so, I suspect you’ll discover many things in the book as a whole that I’ll never be hip to! Do enjoy it!

Yikes! "Sally"! So, all the more do we owe you for that localization! Reading your comment, and GeoX's recent post on Comixology's English scripts, makes me realize anew how extremely important the translator/localizer is. And how grateful I should be to you and other localizers who care about these characters enough to put heart and soul and humor into work that pays peanuts. Wish I could give you all some pirate gold!

If you think the PARROT was “Salty”, you should have heard the LANGUAGE that flowed from me, when I first read the bloody thing! What the gad-fired, dash-blanking, holy heck is all THIS! …Or, maybe it was some approximation thereof.

Seriously, I don’t describe the practice of dialoguing as “underrated” for nothing. One simply cannot ascribe a proper value to it, if one doesn’t see the “raw-form” some of these things come in – or take-on over the years. And, alas, some people (…and worse, some PUBLISHERS) don’t see that value. Thank you for your recognition – and the offer of “Pirate Gold”. We also accept Platinum… and even “Latinum”, should we ever journey to Deep Space Nine.

Dialoguing, as I see it, is more than just adding a few jokes that are applicable to the local culture. It’s understanding the characters, ironing out problems in logic, considering what has come before and respecting that to the best degree possible, and bringing one’s own experience in reading the comics and knowing what is acceptable (and at the same time, entertaining) and what is not.

Do know that “un-dialogued” stories vary widely in quality. Even within my own limited experience, some are absolutely dreadful, while others are virtually “camera-ready”. Later Egmont material is consistently the best in this regard. Then, there are certain others… Eeesh!

Since you mention the current thread over at GeoX (
http://duckcomicsrevue.blogspot.com/2013/02/its-your-money-that-we-want-and-your.html ), I’d have to agree that this matter is coming into play again – and not in a good way. I’d originally thought to call attention to this post over there as a sidebar to the debate over quality translations / localizations, but decided against it so as not to look as if I were calling needless attention to myself. But, if you are drawing parallels as well, I will probably do so.

Elaine: Wish you could give me some pirate gold? I'll take it! Rent is due over here in just a week!

Joe: The awkward translation we worked with came from a 1960s Australian edition. "Pirate Gold" had been published in Australia decades before, but by an entirely different Disney publisher.
Quite clearly, the 1960s translator didn't know the 1960s story was a real sequel to anything in particular—and tried to bluff his/her way through.

Hey, it's happened to ME! When I Americanized "Super Goof Meets Mad Dr. Dunk" for BLOTMAN 1, I didn't know there were earlier stories featuring Dr. Dunk—or Dr. Zxo, as the original Studio Program scripts called him. Had I known the character wasn't just a one-off (and that the story I was using wasn't the first!) I would surely have done things differently.

In the early sixties, I suppose I COULD see how a translator might not recognize the character of Yellow Beak, but wouldn’t the original Italian text (which would clearly have indicated this was SOMETHING of a tribute to a previous work of some kind) have come into play – in even a very minor way – if they intended to use a story originating in Italy?

Even if the scripter “threw everything away” and proceeded blindly and uninformed, completely from scratch, that still doesn’t excuse the ultra-lame closing I cited above. There’s a certain level of pride that even the worst of the Western Publishing writers had, that seemed lacking here.

Again, ego completely aside, I hope that the “Boom! version” manages to become the official English language version, because I’d hate to see that old translation ever again unleashed upon an unsuspecting world.

I think that the fairly slangy translation of Yellow Beak's first line of dialogue (e.g., Z'avez replacing vous avez) suggests that some real thought was put into this work. It's a close translation of your script with some Gallic spice sprinkled in!

My French is good enough to recognize that those are indeed your words and phrases being translated. I share your thrill!

I hate to confess it, but I missed your version when it came out. I will try to locate a copy for my collection. From what I've seen, you have a fine touch for creating crisp, inventive dialogue! If it were up to me, you'd be up to your eyeballs in work for Disney characters or anybody else you may choose to write.

I’m very glad to hear that! Particularly glad for the French Canadian readers!

It’s nice to know that someone is putting a nice amount of thought and work into localizing these stories… especially in view of what GeoX has been reporting at the link I’ve cited above.

I can’t imagine that all of my stuff works in translation, so it’s nice to know that these stories are being made to read well for their audience. Sounds much more like the Dr. Erica Fuchs approach rather than the computer-translation method!

Thanks for the kind words on my Disney dialoguing.

Even MY “French” (…if one could possibly call it “French” without insulting the nation of France – and French-speaking people everywhere) was good enough to discern that it was my version that the French Canadian publisher was working from. For me, there were delights to be found, literally, on every page!

It was even more fun in the “Moldfinger” translation to see a French approximation of my reference to the 1966 BATMAN TV series (“Atomic Batteries to Power! Turbines to Speed!”) and their translation of the word “Nucleonic” – which I culled from the (also 1966) LOST IN SPACE episode “The Sky Pirate” (“Why don’t you blast him with your Nucleonic Planet Buster?”) Since “Moldfinger” itself dated back to ’66 (My all-time favorite year for pop culture!), I figured why not!

A copy of DONALD DUCK # 366 shouldn’t be all that difficult to locate, and I hope you enjoy it when you do. I sure enjoyed working on it. Feel free to share your thoughts, after reading. Say, has anyone ever figured out who Yellow Beak’s former shipmates were, that I referenced in the dialogue on Page 4, Panel 4? Give that one a try when you read it.

Another good personal feeling brought about by this is that, with these editions, I can say (after a fashion) that I actually had some (uncredited, of course) work published in 2012. One language removed, anyway.

There will be something minor that will come in 2013 (in English) – and I hope that leads to more such work. I’ll post on it closer to time of release.

I should add that, while my contribution to “that which is coming in 2013” may be “minor”, it is a product that I am VERY PROUD to be associated with!

Yes, I like it THAT MUCH, and am glad to be allowed to play even a minor role in the compilation of such a quality product! …More when it’s imminent.