Hmmm… After two posts, you’d think I’d have found a better way to express that by now!

It’s STILL about how I’m choosing to watch FAMILY GUY Volume 6 on DVD. Scroll down for more detail – or click HERE.

I’ve just completed the wonderful 100th Episode Two-Parter (…I guess that would make it Episode 100 AND 101) “Stewie Kills Lois” and “Lois Kills Stewie”. 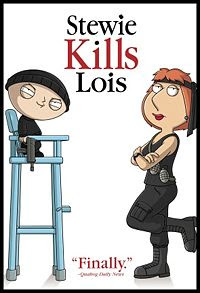 This is actually a milestone moment for Stewie Griffin, as well as the series, as it appears to finally reconcile (…and transition him from) the evil genius, homicidal, would-be world conqueror that made for such a beautifully bizarre characterization in FAMILY GUY's early seasons with the less evil and more… um, “flamboyant” characterization demonstrated in the seasons since the show’s hiatus. 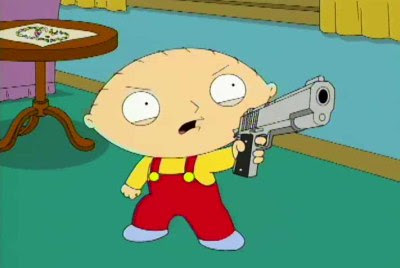 In other words, we get to see how Stewie “killing Lois and taking over the world” would play out… and then we and the series move on. 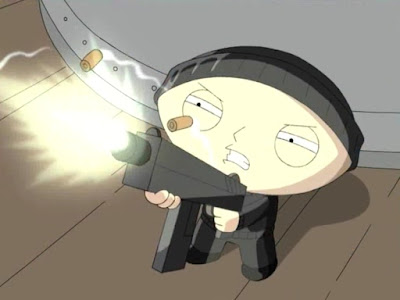 But, per the unique way I’ve elected to enjoy the episodes on FAMILY GUY Volume 6, I get to see it play out in TRIPLICATE. That is, in the three ways that each episode is offered: “Original Television Episode”, “DVD Uncensored” and DVD Version with Optional Audio Commentary. 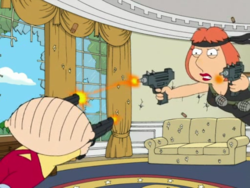 If you’re a fan of FAMILY GUY, you’ve already seen this on TV… multiple times, in fact, due to the writer’s strike shortened season. But, as I keep telling you about almost every TV show on DVD, it’s a completely different experience when you “spin the disc”!

Part Two, in particular, shines in its variant offerings.

Its running time is an unbelievable 26:10 in its “DVD Uncensored” state, vs. 21:47 in its “Original Television Episode” version!

A large portion of this extra footage consists of a musical number performed by Stewie (and an incredible array of background characters and animated dancers) after he takes over the World. He sings on about the “List of Enemies” he is compiling, upon whom he will take revenge… and it is based upon “I’ve Got a Little List” from Gilbert and Sullivan’s The Mikado! In it, he takes shots at everyone and everything on his “sh*t list”, including THE SOPRANOS and rival Sunday Night Animated Sitcom THE SIMPSONS. 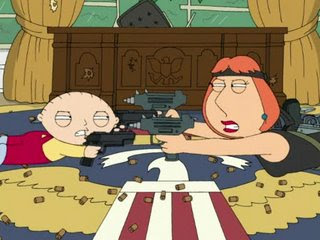 This piece – and a magnificent “action score” for the final over-the-top-funny-violent battle (in the White House Oval Office, no less) between Stewie and Lois – is a true musical tour-de-force by composer Ron Jones, formerly of DUCKTALES and STAR TREK: THE NEXT GENERATION. He even satirized ST:TNG’s season-ending cliffhangers with his cue to end the cliffhanger of Part One.

The Optional Audio Commentary has creator Seth McFarlane discussing the music cues with Jones and actors and crew alike commenting on the incredible action.

If you saw “Stewie Kills Lois” / “Lois Kills Stewie” on TV, you didn’t see ANYTHING like this! As I’ll say again and again… pop in a DVD, and enjoy TV the way it OUGHT TO BE enjoyed! 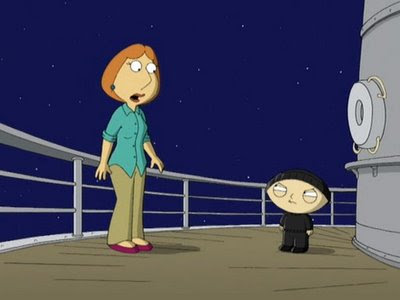