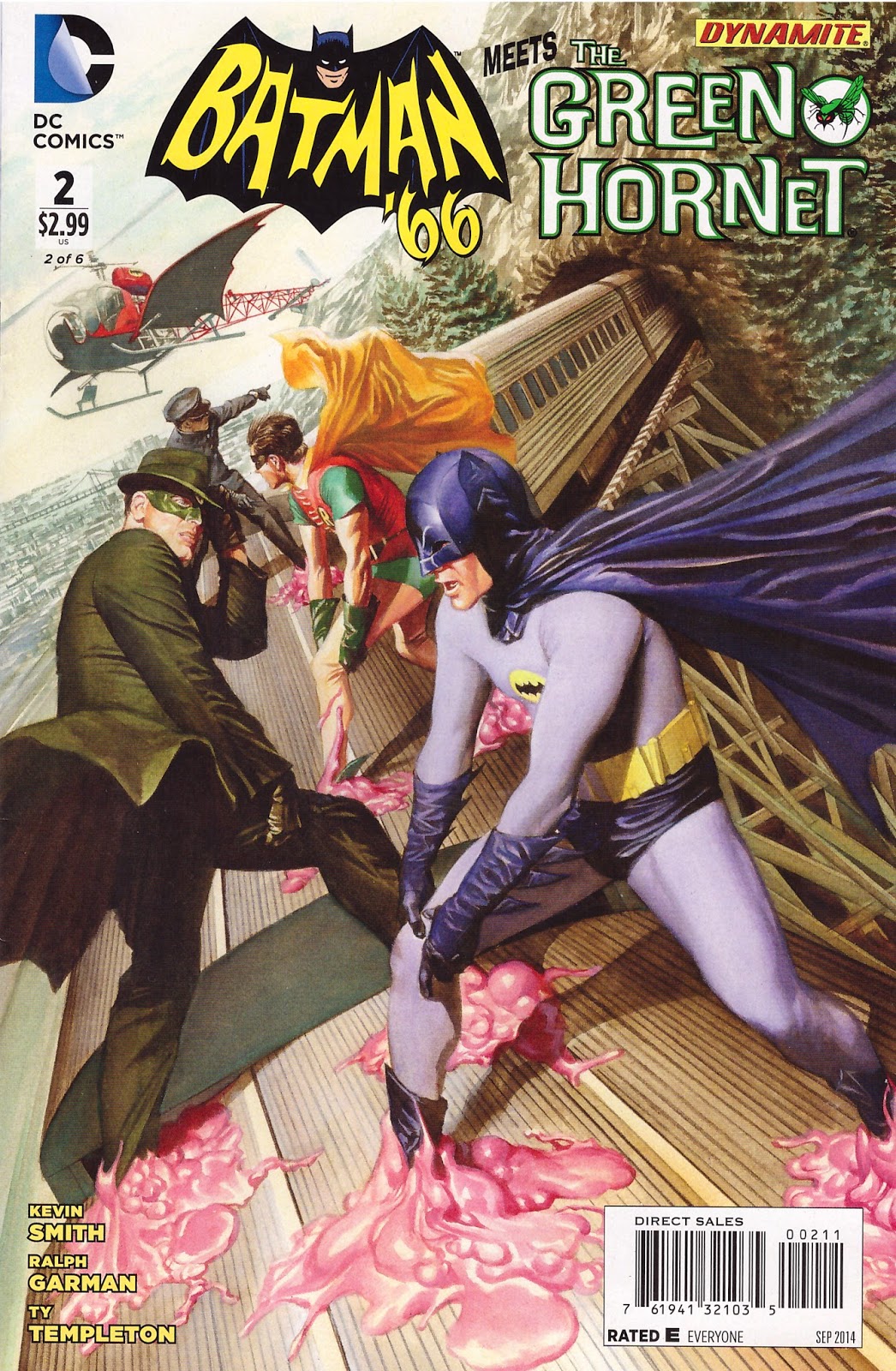 When we last left our heroes, in a cliffhanger ending at the end of BATMAN '66 MEETS THE GREEN HORNET # 1, Batman, Robin, The Green Hornet, and Kato were glued to the top of a fast-moving train headed straight toward a tunnel, and hero-squishville! 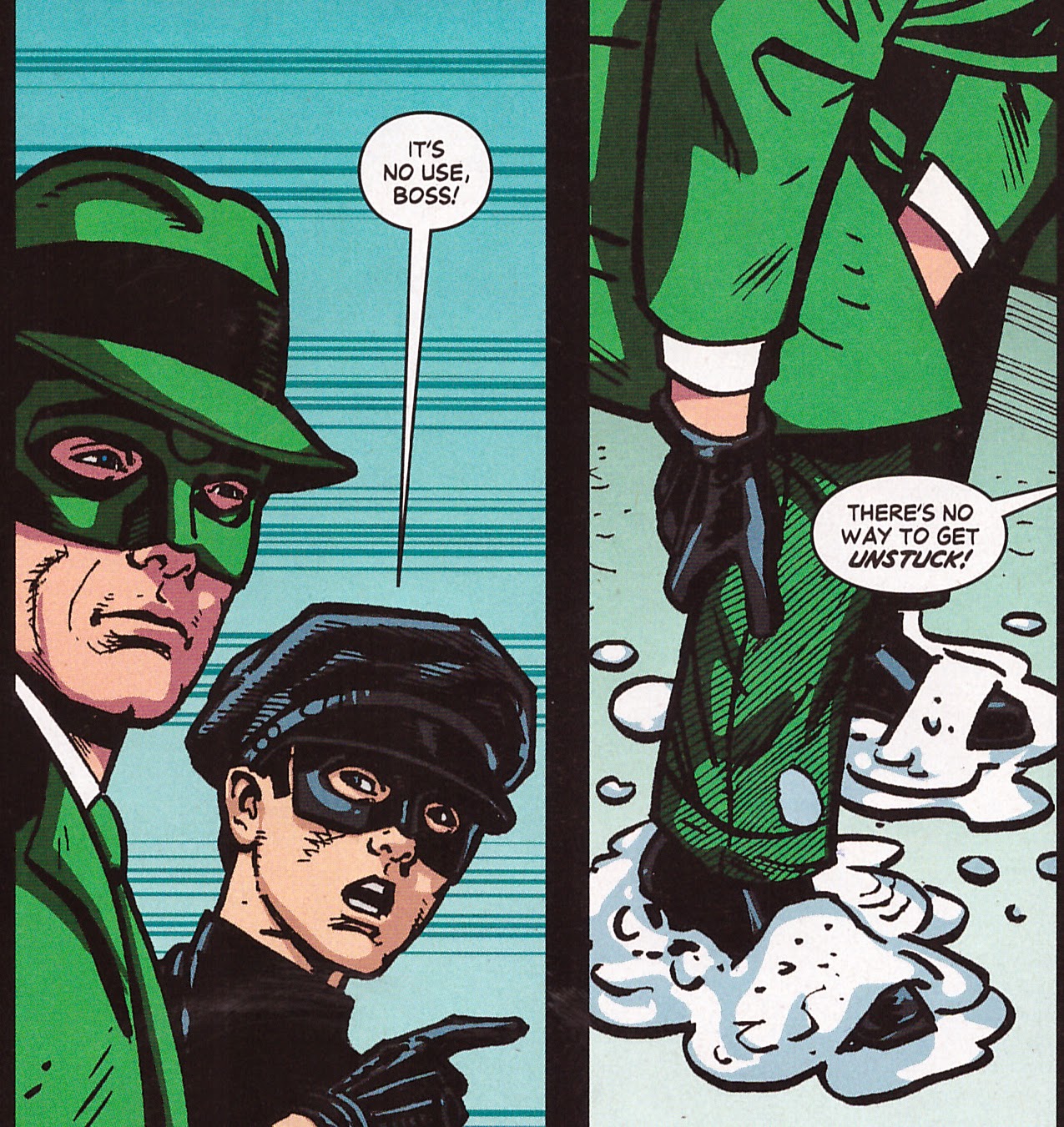 But, if issue # 1 represents "Wednesday", and its typical promise of certain death, issue # 2 brings "Thursday" and its requisite hair-breadth escape. 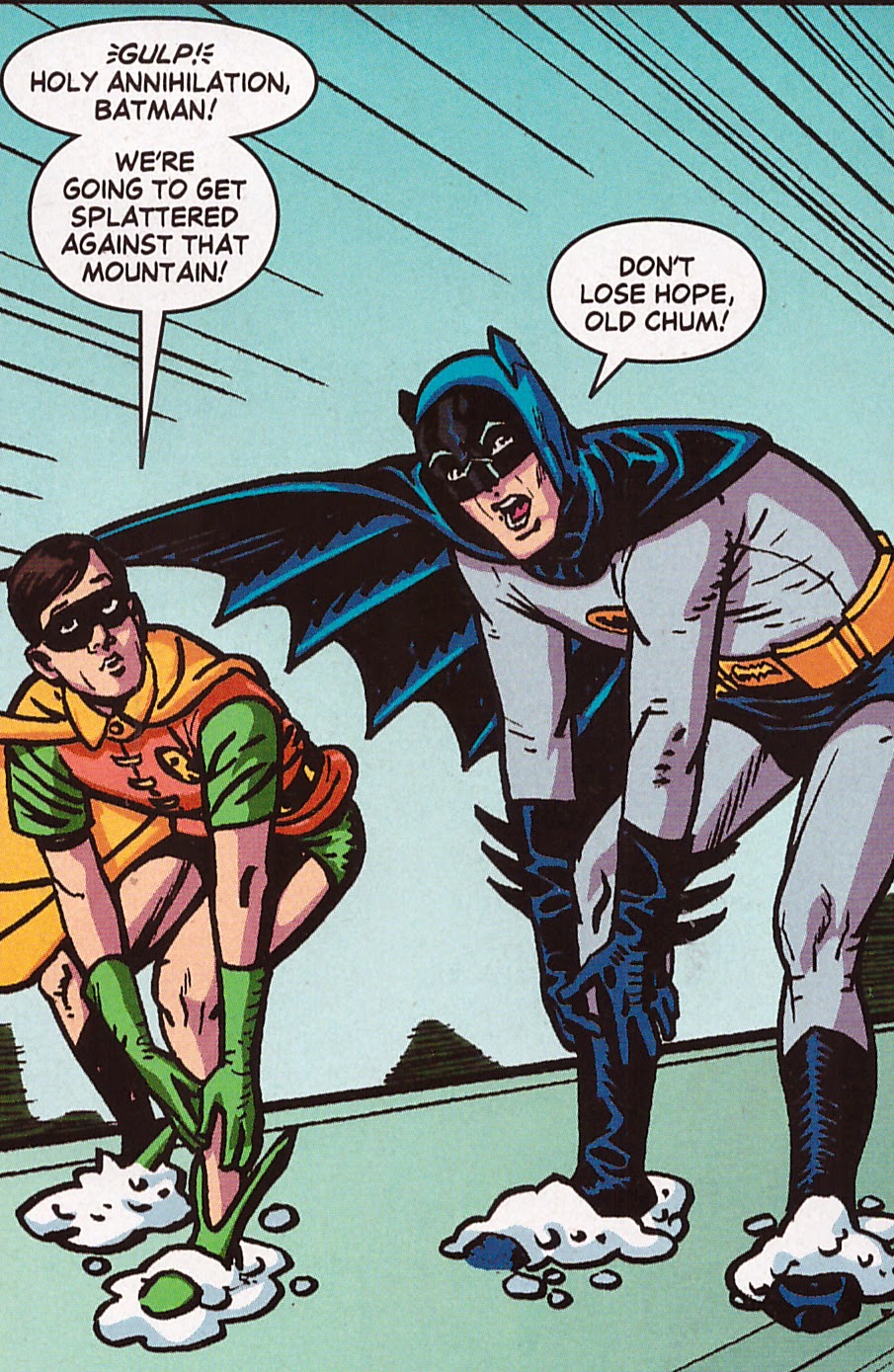 The Hornet and Kato find their own way off their "rail car of doom", as (separately) do the Caped Crusaders. 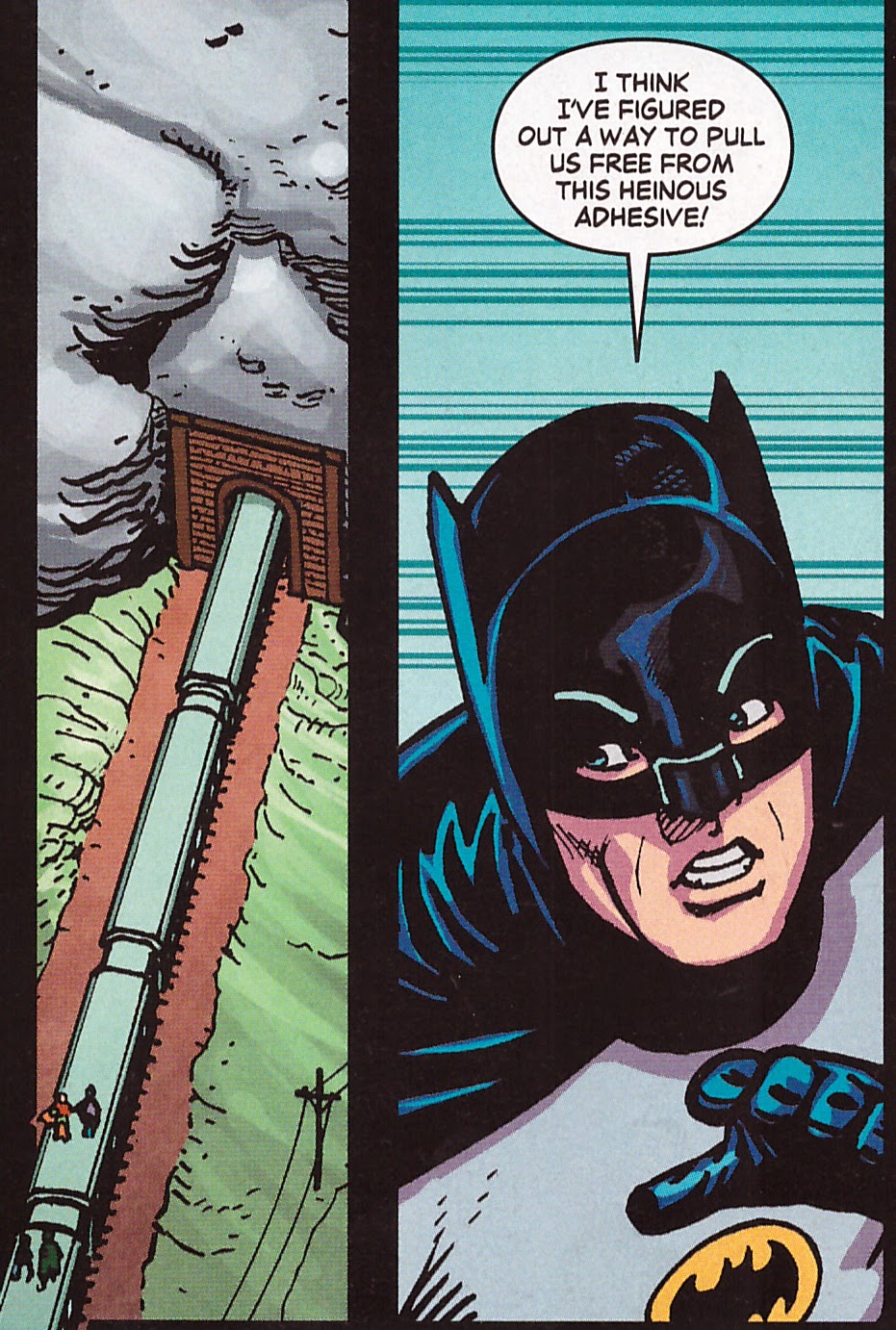 ...Odd that neither team thinks much of rescuing the other, but we'll let that pass for a still greater oddity.

Via remote-control, Batman employs the Bat-Copter, which had been hovering nearby, to lift himself and the Boy Wonder out of their Bat-boots, which had been affixed to the train by their old enemy Colonel (now General) Gumm. 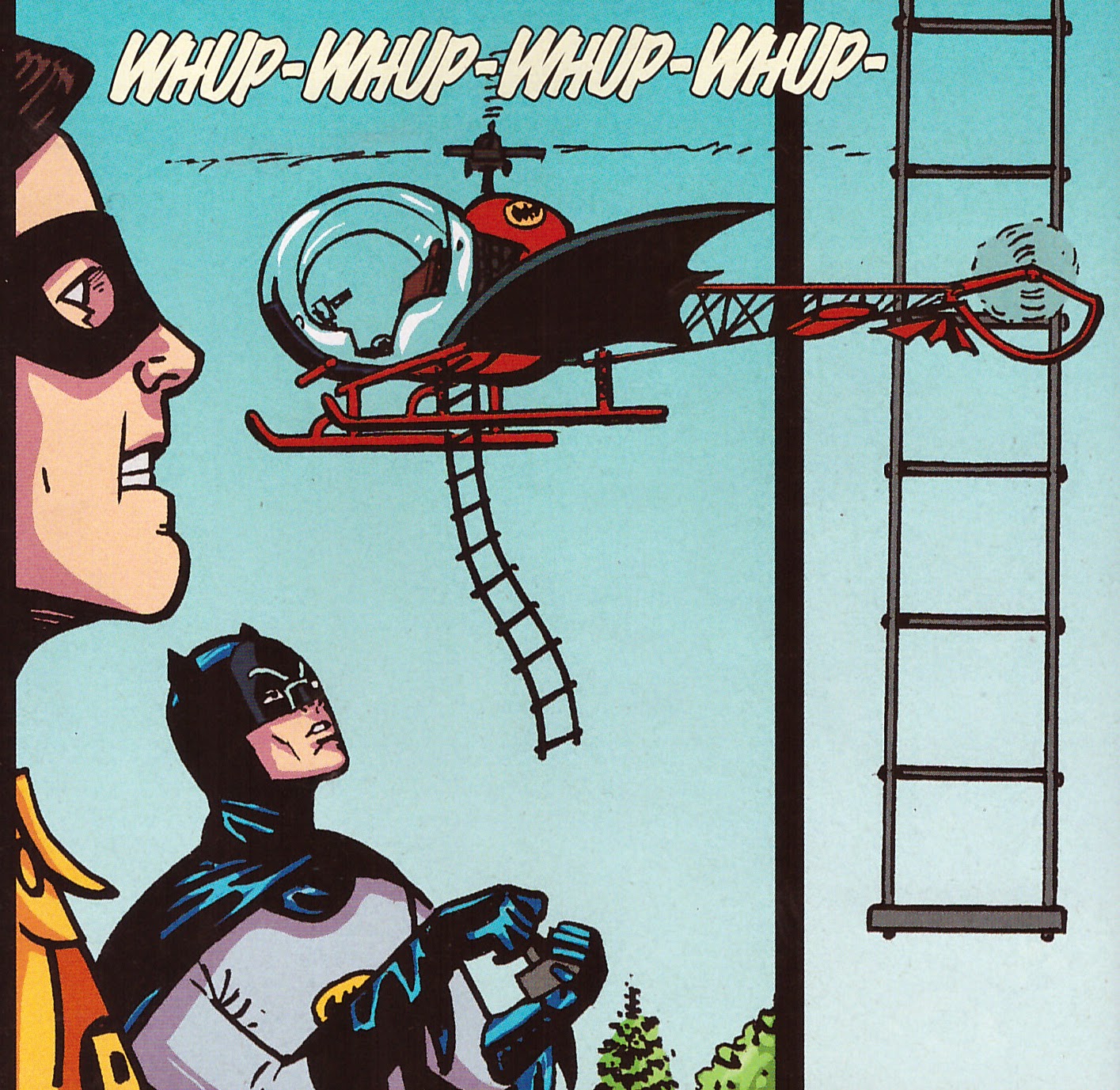 Up they go, just in time, leaving their boots behind! 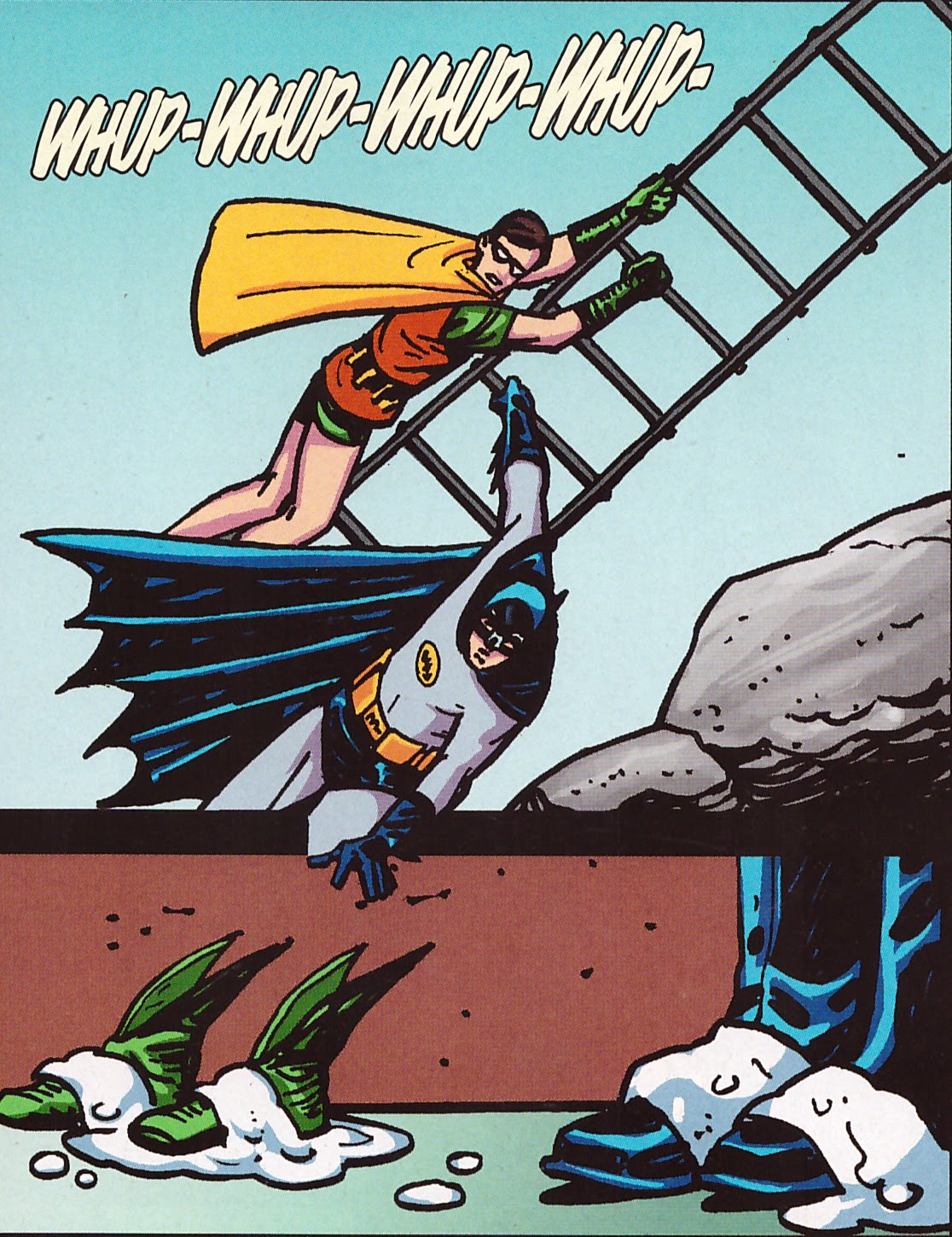 Yep, here's a close-up shot of their Bat-Bare-Feet! 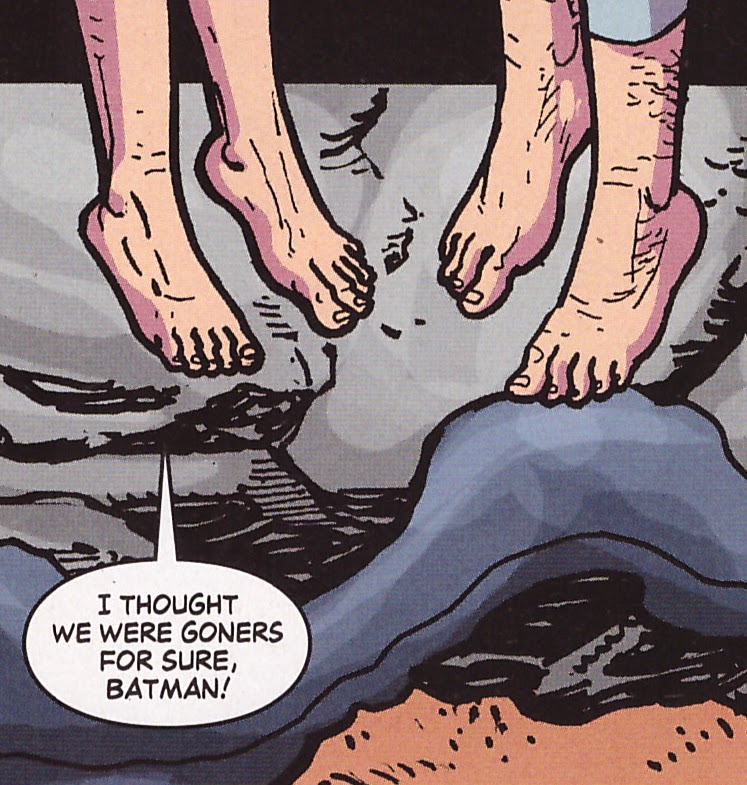 And another full-figure shot of them on the ladder, sans shoes.

But, WHAT'S THIS, as they ascend to the safety of the waiting Bat-Copter? 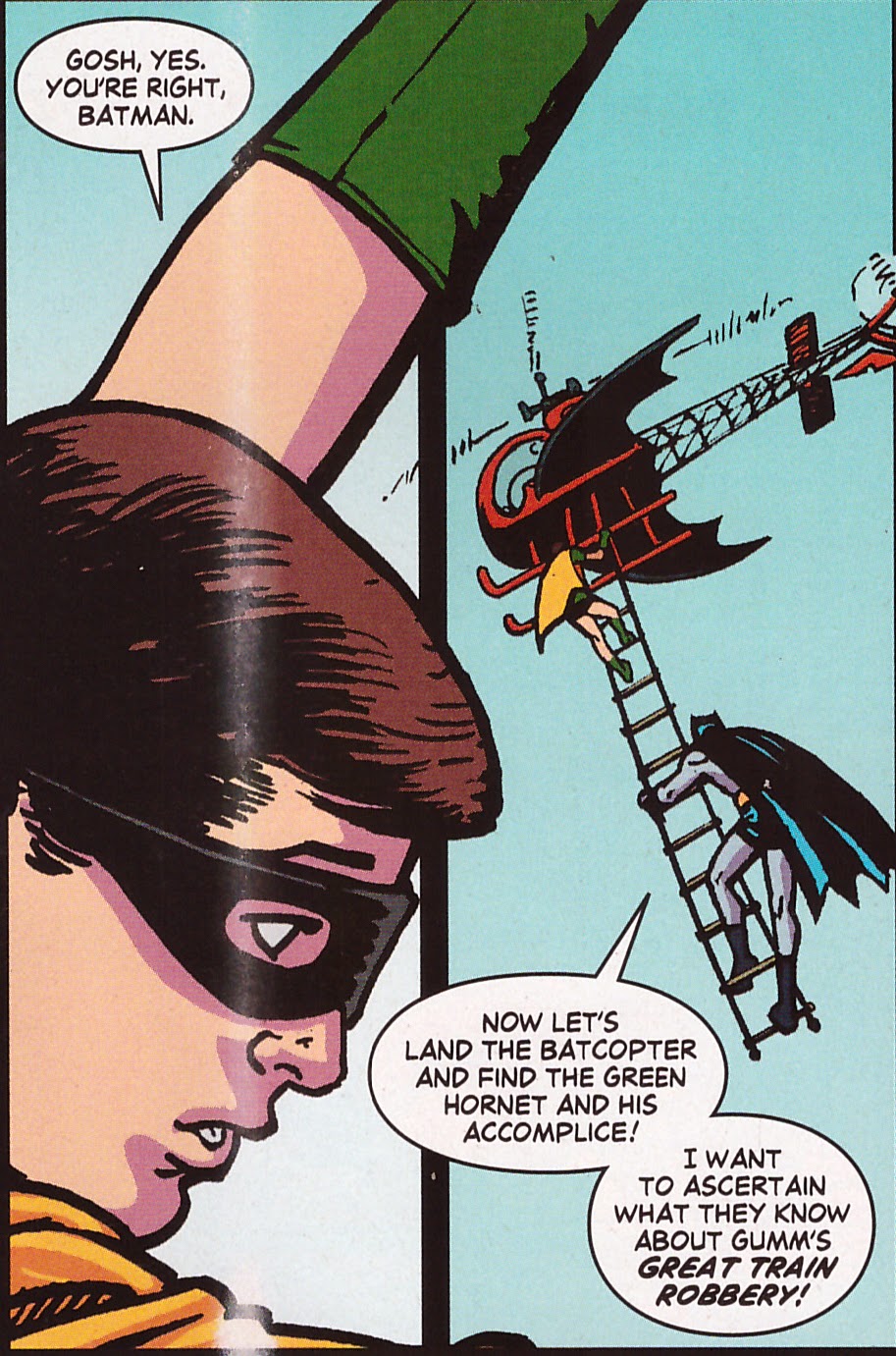 ...And, before even such miracle workers as they, could possibly have changed into a spare pair! 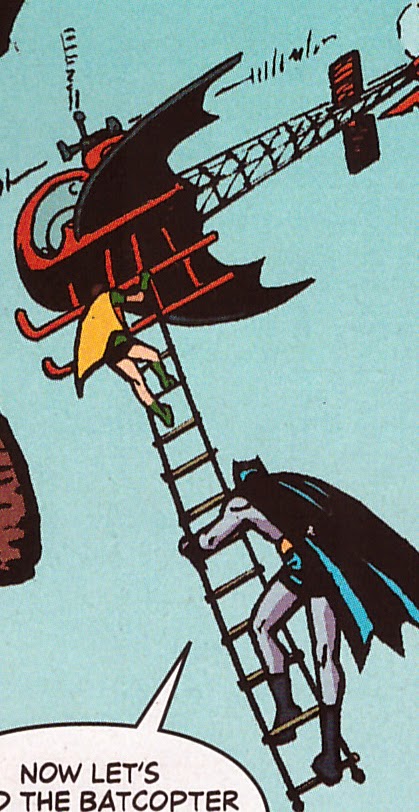 Then, safely back on the ground, and reunited with The Green Hornet and Kato, the footwear has faded once again! 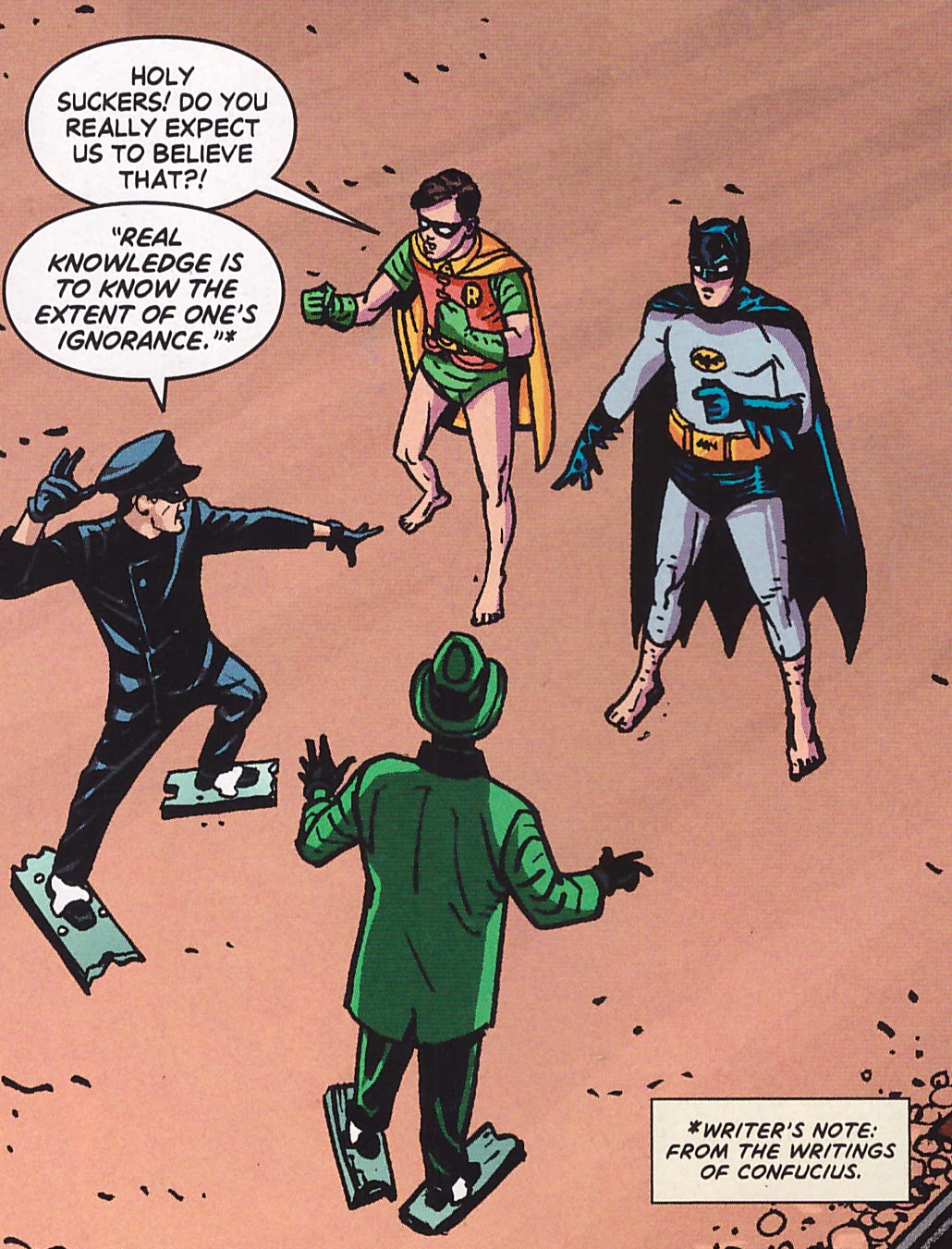 I thought about it for a time (Imagine the luxury of being able to ponder such things!) and I realized that, while it might very well have been an unforgivable error on the part of both the artist and the editor, it might be something else entirely... 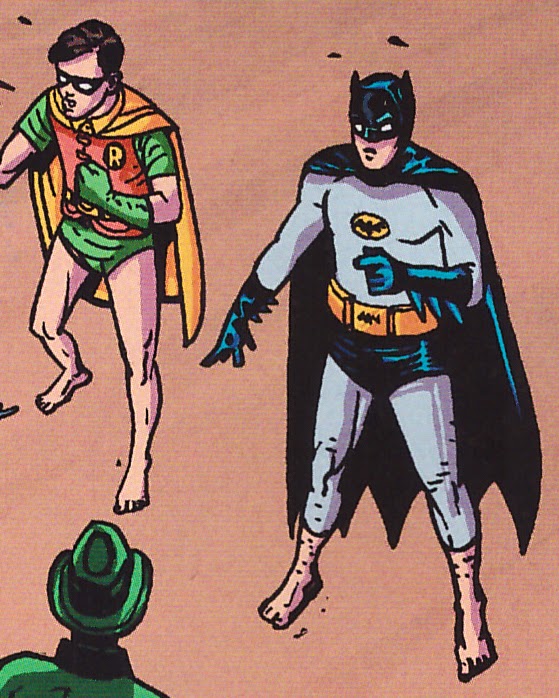 It just might be a tremendous and purposeful HOMAGE to those wonderful days of 1960s television, where STOCK FOOTAGE was employed wherever possible to cut costs - and, on occasion, that stock footage didn't quite match the newly filmed scenes.

Yes, the reason Batman and Robin have boots, in a situation where they couldn't possibly have, is an ingenious nod to the sixties-era use of stock footage - in this case stock footage of the Dynamic Duo climbing the ladder to the Bat-Copter... Boots and all!

...Or, it just coulda been a mistake!  You decide!

Ha! I sure hope it wasn't a mistake now!

You could always ask Ty Templeton if it was on purpose, but why ruin the magic?

My first thought was that it was simply a mistake. But, if the artist just forgot that they left their boots behind, why are they shown barefoot again in the next panel? So, maybe it was an homage to stock footage sequences.

You see the the same kind of thing in movie serials and "B" series Westerns, particularly in the 1950's, when budgets were being cut, requiring increased use of stock footage. Commando Cody would have a bulky radio on his belt in the dialog scenes, and it would disappear in the action scenes. Or, a cowboy hero would wear a black shirt in the dialog scenes, but would appear to have on a white shirt in the big chase scene, then would have a black shirt again at the end.

Or, to cite a contemporary of Batman, Irwin Allen's shows used a lot of stock footage. Sometimes ("Deadly Waters," "The Sky's on Fire") the number of front ports in the Seaview changed from one scene to the next.

Maybe someone could publish comics based on "Voyage to the Bottom of the Sea" and "Lost in Space" with similar homages. Like, the monsters menacing the Seaview this month could look exactly like the ones that chased Dr. Smith last month.

I’d never be one to “ruin the magic”, when I can theorize something to explain it!

And, yes… The BATMAN ‘66 comics have been pure “magic”, which is all the more reason I was taken aback by that apparent goof. …Enough to go so far as to conjure up a possible explanation that’s wild enough to be plausible – especially among enthusiasts of ‘60s television and older films, who have seen this occur again and again!

All the “on-camera / on-panel” Bat-Copter scenes were stock footage, with only the ROPE LADDER appearing in new scenes with comic-book Adam West and Burt Ward. There was a stock “climbing to the copter” scene (presumably drawn for the heretofore unknown BATMAN ‘66 THE MOVIE, comic book adaptation) that was inserted into BATMAN ’66 MEETS THE GREEN HORNET # 2, to more economically execute the rescue scene.

…Except that original footage (panel-age?) had Batman and Robin wearing their boots! Hopefully, the readers won’t notice – but we did, thanks to modern comic-book printing and coloring techniques, just as we see more “hidden wires and other things” when watching the old shows on Blu-ray players and HD TVs.

Of course, Irwin Allen was as huge a practitioner of this as anyone. How many times did the Jupiter II land on a circular landing pad, which was nowhere to be found in the rest of the show? Never mind how often the Seaview miraculously sheared-off the top of the very same underwater peak, wherever in the world they happened to be.

Beyond stock footage, how about Irwin doing things like “redressing” a monster simply by sticking a wind-up key to its back with a suction cup? (LOST IN SPACE “The Toymaker”, one of my favorites, BTW.)

The borrowing didn’t end there, because the SOUND that monster made was clearly repurposed by FOX as the sound of the fighters in STAR WARS!

Finally, I want to WRITE that “Irwin Allen Comic Book Series” – and in pure sixties style, unlike the LIS comics of more recent vintage. Wouldn’t it be a wonderful “companion” to BATMAN ’66?

Forget monsters, I’d have Mr. Pem meet Dr. Chronos – and have them inadvertently drawn into the Time Tunnel! And, for good measure have the time-traveling “Bruce Dern and Yvonne Craig characters” (or the Warren Stevens Space-Pod time traveler) from LAND OF THE GIANTS show up. Don’t ask how I’d pull it off, unless someone makes me a firm offer! …I’ll worry about it then.